Accessibility links
Cal Finds Roughest Road In 50 Years Of Car Sales The unforgettable "Go See Cal" jingle turned Cal Worthington into one of the nation's top car dealers. At 88, he's still appearing in ads with his "dog" Spot and strategizing about how to give the foundering industry a boost. 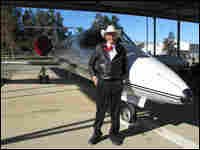 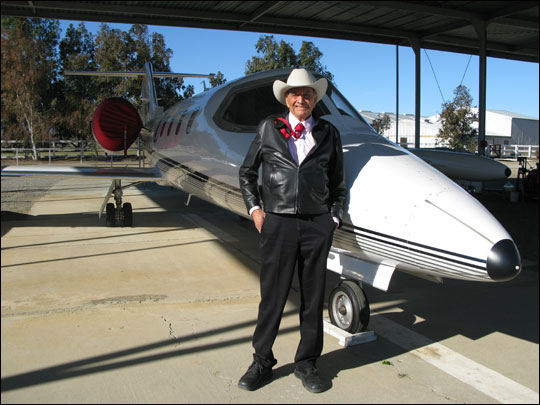 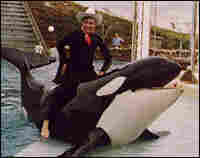 Cal has performed in advertisements with dozens of different animals over the years. You can see additional photos and videos on his Web site.

For 50 years, California cowboy Cal Worthington has been selling cars with a jingle that simply won't leave people's heads.

And so on. His trademark was appearing with his "dog," Spot — not a canine, but some exotic animal. (Watch a version with an Orca here, and a tiger here.)

The stubbornly infectious marketing approach helped turn Worthington into one of the top auto dealers in the United States. Over the years, he became a folk hero of sorts. At 88, he's still selling cars, but the business sure isn't what it used to be, he says.

"This is absolutely, without a doubt, the worst time I've ever seen in the car business," Worthington laments from his 24,000 acre ranch, where he still often shoots four commercials a day.

As Worthington leads a tour of his home recording studio, he explains why, despite discouraging sales, he has no plans to give up the business anytime soon.

Convincing the federal government to bail out the auto industry has been a tough sell. But for a small town in southern California, it was a no-brainer when a couple of local car dealerships needed help.

Mitchell Frahm approached the city of Norco last fall, when business at his Chrysler-Jeep- Dodge dealership dropped by 50 percent. He's been selling cars for 40 years — the last 20 of them in Norco — and until recently, it's been a good business. But now his would-be customers are more focused on hanging onto their jobs and their homes than on buying cars.

And as you've heard just about everywhere, the banks aren't making loans these days. Frahm says he was in real danger of going out of business "if I didn't receive some working capital. I don't think anybody has a crystal ball, but I think everybody knows it's going to be a tough year."

But the city of Norco came riding to the rescue. And that's probably how they'd put it in the place known as Horsetown, USA.

Mayor Kathy Azevedo says the reasons for the moniker are as obvious as the 120 miles of horse trail that line Norco's streets. All home sites must be at least half an acre, all the better to keep a horse or two. Everything in this city is geared for people who don't walk or drive nearly as much as they ride, she explains.

"You can tie up your horse and go shopping and dine and get back on your horse and hit the 120 miles of horse trail to go home or to a friend's house or wherever," she says.

This lifestyle is supported to a great extent by the sales taxes generated by the town's auto dealerships. So in late November, the city tapped into its redevelopment money and extended lines of credit worth half a million dollars to Frahm and another auto dealer in town.

"We need them, and they need us," says Azevedo. "In fact, the auto mall is 40 percent of our sales tax revenue in the city. We thought it was a perfect use of our redevelopment agency funds to give them this line of credit, and hopefully it'll get them through the storm."

In just the past few months, the region has seen 11 of its car dealerships shut their doors. So Husing says other nearby cities may follow Norco's lead. Mayor Azevedo thinks her city is already a trendsetter.

"We like to jest and say maybe the federal government wanted to pattern themselves after Norco when they decided to help with the bailout [of the auto manufacturers]," she says.

Now Frahm is personally responsible for a half-million dollar loan, but he seems to be taking it in stride.

"Sincerely, if I didn't believe that I could take care of the debt, I wouldn't [have taken the loan]. I have all the faith in the world in our business that we're going to be here — we're going to get through it," he says.

Both Frahm and the city of Norco have too much riding on this venture to think of it any other way.