Accessibility links
Bomb Blast, Shooting Mar Gaza Cease-Fire An Israeli soldier and a Palestinian farmer were killed in separate incidents that mark the first rupture in a cease-fire that began Jan. 17, officials said. 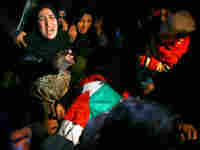 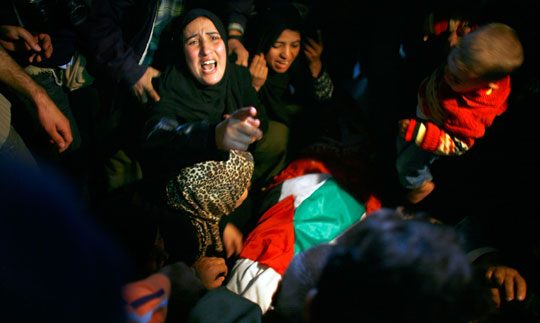 Relatives mourn the death of Anwar Ziad Sammor, 27, who was killed by Israeli gunfire Tuesday.

An Israeli soldier was killed Tuesday near the border with Gaza after a bomb blast hit an Israeli army patrol — the first major breach of a cease-fire that went into effect Jan. 17.

Also Tuesday, Palestinian security officials said Israeli troops along the border shot and killed a 27-year-old farmer and wounded two others. The military had no immediate comment, and it was unclear whether the two incidents were related. The army said it was investigating the incident.

Israeli soldiers quickly crossed into Gazan territory in search of the militants, and Israel's defense minister, Ehud Barak, said Israel "cannot accept" the attack. There was no claim of responsibility.

"We will respond, but there is no point in elaborating," Barak said in comments released by his office.

Later, Israeli warplanes launched an airstrike against targets inside Gaza, Hamas said. It said an airstrike wounded one of its militants as he rode a motorcycle in the southern Gaza town of Khan Younis. Residents said Israeli tanks and bulldozers have also entered the area where the roadside bombing took place and were tearing up some vacant land — apparently to prevent it from being used to stage attacks.

The Israeli military said an Israeli patrol near the border community of Kissufim was the target of the original bomb attack. The military dismissed the possibility that the bomb had been planted before the cease-fire took hold.

Israel closed the border crossings after the soldier was killed, meaning humanitarian aid cannot reach Gaza. The increase in tension along the border comes the day before U.S. special envoy George Mitchell is to arrive in the region to try to shore up the cease-fire deal between Israel and Hamas.

Since withdrawing its troops, Israel has threatened to strike hard at any violations of the deal.

Heavy gunfire was audible along the border in central Gaza, and Israeli helicopters hovered in the air, firing machine-gun bursts, Palestinian witnesses said. An Israeli jet broke the sound barrier and set off a loud sonic boom over Gaza City not long afterward, possibly as a warning, but there were no further reports of Israeli retaliation.

Meanwhile, U.S. Secretary of State Hillary Clinton said on Tuesday that Israel had a right to defend itself and that Palestinian rocket attacks from Gaza on the Jewish state could not go unanswered.

"We support Israel's right to self-defense. The [Palestinian] rocket barrages which are getting closer and closer to populated areas [in Israel] cannot go unanswered," Clinton said in her first news conference at the State Department.

Israel wants an end to the rocket attacks and wants guarantees that Hamas will be prevented from smuggling weapons into Gaza from Egypt. Hamas has demanded that Israel and Egypt reopen Gaza's border crossings, which largely have been closed since Hamas took power. The crossings are Gaza's economic lifeline.

The Israeli offensive killed 1,285 Palestinians, more than half of them civilians, according to records kept by the Palestinian Center for Human Rights. Thirteen Israelis, including three civilians, also were killed during the fighting.