Accessibility links
California Woman Gives Birth To Octuplets A woman in Southern California has given birth to octuplets — six boys and two girls. It's believed to be only the second successful delivery of octuplets in the United States. 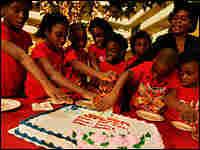 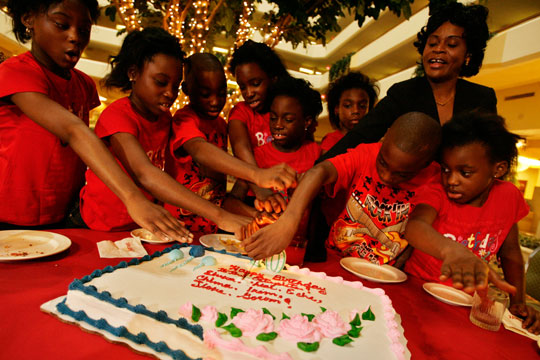 The seven surviving members of the first octuplets born in the United States celebrate their 10th birthday at a party on Dec. 20, 2008, in Houston. From left, Ebuka, Echerem, Jioke, Chima, Gorom, Chidi, Ikem, their youngest sister, Favor, and their mother, Nkem Chukwu.

A woman in Southern California has given birth to octuplets, six boys and two girls. It's believed to be only the second successful delivery of octuplets in the U.S.

Already, a day after their birth, all eight octuplets are breathing on their own without the assistance of mechanical ventilators, according to doctors at the Kaiser Permanente Bellflower Medical Center.

The mother, who asked not to be identified, "is very comfortable now and is currently stable," says Maples, the center's chief of OB-GYN. "She's also very excited about the health of her babies and she's extremely happy."

The babies weigh between 1 pound, 8 ounces, and 3 pounds, 4 ounces. "The little one is actually very feisty and is doing very good right now," says Dr. Mandhir Gupta, a neonatologist who assisted with the delivery. "This baby was on the ventilator in the beginning, but I was able to take the breathing tube out last night."

The parents and their doctors were surprised when they found an eighth baby during the cesarean section.

"It is quite easy to miss a baby when you're anticipating seven," says Dr. Harold Henry, chief of maternal and fetal medicine at the center. He was one of the 46 doctors, nurses and assistants who helped with the delivery.

Mulitple births often result after the use of drugs aimed at increasing fertility. Officials at the Kaiser center declined to say whether the mother had taken fertility drugs.

The previous set of U.S. octuplets were born in Houston in 1998 to a 27-year-old Nigerian woman, Nkem Chukwu. The first infant, a girl, was born on Dec. 8 that year, followed by five more girls and two boys on Dec. 20.

Of these, the tiniest — 10.3 ounces at birth — survived only a week, dying of heart and lung failure. The largest weighed 1 pound, 11 ounces.

The survivors celebrated their 10th birthday last month in Houston.

Chukwu used fertility drugs, which greatly increases the chances of twins, triplets or even more.

In many cases, women are offered the option to selectively abort one or more fetuses during pregnancy to improve the survival chances of the other fetuses. Chukwu declined to do that, as did the woman in California who gave birth this week.

Studies have shown that babies born prematurely with very low birth weights are at very high risk of physical and mental impairment.

According to the parents, the surviving Chukwu children have developed normally and all healthy and active. They're in the middle of fourth grade.

From wire reports and NPR archives