Accessibility links
Video Hints At Unprovoked Attack In BART Shooting New video in the New Year's Day shooting death of an unarmed man by transit police in Oakland, Calif., shows him first being punched in what appears to be an unprovoked attack. One of the officers already has been charged with murder. 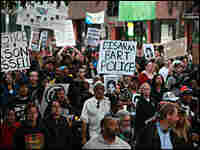 Demonstrators in Oakland, Calif., protest the New Year's Day shooting death of Oscar Grant by Johannes Mehserle, who was a transit officer at the time. Justin Sullivan/Getty Images hide caption 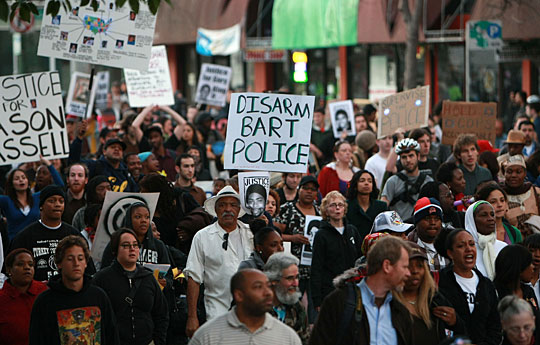 Demonstrators in Oakland, Calif., protest the New Year's Day shooting death of Oscar Grant by Johannes Mehserle, who was a transit officer at the time.

New home video has surfaced in the New Year's Day shooting death of an unarmed African-American man on a Bay Area Rapid Transit platform in Oakland, Calif. It shows what appears to be an unprovoked attack by BART police.

Minutes before Oscar Grant, 22, was killed by then-BART officer Johannes Mehserle, he was assaulted by another BART officer, the video suggests. Mehserle, who resigned from the force, has been charged with murder.

Several BART passengers took video footage of the fatal incident, and it spread widely on the Internet. The previously unseen video footage was recorded by an anonymous passenger and originally aired on local KTVU-TV.

It shows an unidentified BART officer approaching a small group of young black men detained by the police. The officer punches one of the men in the face; he appears to be Grant.

The officer who threw the punch is under investigation. He has not been officially identified, and he has not been charged with any offense.

Peter Keane, who teaches at Golden Gate Law School in San Francisco, says the punch appears to be unprovoked.

"It shows another officer making a brutal physical attack upon Oscar Grant before the shooting and actually precipitating the events that happen," Keane says.

In another video picking up the action moments later, Grant is lying face down when Mehserle shoots him in the back.

That shocking image helped incite a riot in downtown Oakland a week after the shooting. A second demonstration was mostly peaceful.

The videos of that night remind many people here of the 1991 Rodney King beating by four Los Angeles police officers.

That incident also was caught on tape, but the officers involved were acquitted, setting the stage for violent riots a year later. In Oakland, the videos seem to be the driving force behind Mehserle's arrest.

The Court Of Public Opinion

He says the BART videos don't tell viewers what was going on in the officers' minds.

"We don't know what they had seen and experienced and what information they were operating under before the tape started rolling," Meister says.

If the state can't prove that Mehserle intended to kill Grant, it might convince the jury that this was a case of manslaughter, says Kara Dansky, executive director of Stanford University's Criminal Justice Center.

"That's why mental state is key, because all of this hinges on what the state can prove with respect to what was going on in Officer Mehserle's mind," says Dansky.

But no one knows what Mehserle was thinking, because the officer quit the force before being questioned by department investigators.

John Burris is the Oakland attorney representing Grant's family. Whether Mehserle committed murder or manslaughter, he says the real question is this: Will he be held accountable?