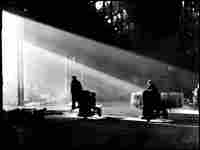 Of Time and the City

'Between Sleeping And Waking'

'We Love The Place We Hate'

In recent decades, many cities have built visitors' centers where they screen bubbly orientation films. Of Time and the City, Terence Davies' rumination on his Liverpool childhood, is exactly the sort of movie those places don't show.

As he matches archival footage to first-person narration, Davies reveals a fondness for such lost attractions as the city's elevated railroad and its housing estates.

But the writer-director doesn't prize much else about his hometown, rejecting The Beatles — "Yeah, yeah, yeah," he grumbles — and recoiling from high-rise public housing. The latter he cites as an example of "the British genius for the dismal."

Born in Liverpool just months after the end of World War II, Davies grew up working-class and Roman Catholic. As an adult, he fled the city and nearly everything it represented, yet returned to it repeatedly in such semi-autobiographical movies as Distant Voices, Still Lives.

Not everything that made Davies' childhood dismal was exclusive to Liverpool. He hated the Catholic Church, although he doesn't seem pleased that the city's former cathedral is now a glitzy nightspot.

And he loathed Queen Elizabeth — he calls her "Betty Windsor" — both on general principles and because she staged an extravagant wedding and an opulent coronation while everyday Britons were still subject to rationing.

Of Time and the City is narrated in a deep-voiced purr that couldn't be less evocative of boyhood, and it can be surprisingly impersonal. Meanwhile, Davies garnishes his commentary with lines from Shelley, Jung, Engels, Joyce, Chekhov, Eliot and more; some are pertinent to the filmmaker's quest to recapture the past, but others seem like random forays into Bartlett's.

Davies' first film since his 2000 adaptation of Edith Wharton's The House of Mirth, Of Time and the City will appeal to viewers with an interest in mid-20th century trains, buildings and mores. It may also strike a chord with those who prefer Mahler and Peggy Lee to The Beatles (although the director finds occasions to use both The Hollies and The Swinging Blue Jeans).

Emotionally, however, the movie frustrates. Some moments are intimate and moving, but the film is often distant from its subject, and the sum total is only intermittently compelling. Of Time and the City doesn't make it entirely clear that Davies wanted to take this anti-nostalgia trip.