Accessibility links
Stimulus Package Includes Millions For The Arts Singers, actors and dancers can stimulate audiences, but can they also stimulate the economy? The authors of the current stimulus package think so — they have included $50 million for the National Endowment for the Arts and $150 million for infrastructure repairs at the Smithsonian. 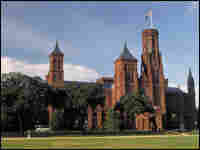 Singers, actors and dancers can stimulate audiences, but can they stimulate the economy? The authors of the current stimulus package seem to think so — they have included $50 million for the National Endowment for the Arts and $150 million for infrastructure repairs at the Smithsonian.

Arts groups large and small are hurting, just like every other industry: The Sacramento Ballet has canceled performances; the administrative staff of the Virginia Symphony Orchestra took a 20 percent pay cut; the Austin Museum of Art is postponing plans for a new museum downtown.

Some art institutions are shutting down altogether: The Milwaukee Shakespeare Theater Company is one example. The company closed its doors in October when its main supporter — the Argosy Foundation — cut its funding.

"I've never filed for unemployment in my life, but now I am officially eating off of the system," says Paula Suozzi, who was Milwaukee Shakespeare's artistic director.

Suozzi was one of six full-time people who lost their jobs. And like arts organizations across the country, the company also employed dozens of freelancers — actors, designers, directors.

"It was a lot of people, and it affects the whole economy of the city," Suozzi says.

It's hard to get a handle on exactly how many other arts organizations around the country are in similar straits, but there are enough warning signs that some arts leaders are calling for government help. Michael Kaiser, head of the John F. Kennedy Center for the Performing Arts, says the arts industry is made up of thousands of small organizations, so they don't always make headlines when they go bankrupt.

"The arts as a totality in this country employs 5.7 million people," Kaiser says, "so we're not a small sector of this economy. Our employment levels are important to this economy."

The Obama administration seems to agree. Bill Ivey, former chair of the NEA, was on the president's transition team. He says the agency is included in the package because it already has a system in place for moving money into the economy.

"The NEA really can give away money efficiently and effectively and quickly through a very responsible, peer reviewed, grant-making process," Ivey says.

But others remain unconvinced.

"There is absolutely no way this will stimulate the economy," argues Brian Riedl, a senior federal budget analyst for the Heritage Foundation. He believes funding for the NEA — like several other items in the stimulus package — will not grow the economy.

Mark Rosentraub, a dean and professor of urban affairs at Cleveland State University, says the current stimulus contains both long-term initiatives that will increase productivity and short-term projects, like the NEA, that will get money into circulation now.

"When you're having massive layoffs of this level, you've got to get people back out to work so there's money to spend," he says. "We've got to create and get projects in the pipeline now."

Some members of Congress have said that while it may be worthwhile to spend an additional $50 million on the NEA, it does not belong in an emergency stimulus package. Rep. Mike Simpson (R-ID) is the ranking member of the interior subcommittee that funds the NEA.

"None of the subcommittees have had a hearing on any of these appropriations in this bill, including funding for the arts," Simpson says. "Maybe that's an appropriate place to spend it. Maybe there are other places that could be more effective in terms of economic stimulus."

Whatever happens with the stimulus package, Ivey believes a healthy arts community is important, especially during hard times.

"We're not going to be able to think about happiness and quality of life only in terms of the next vacation or the bigger house or the new car," Ivey says. "Once we move away from a consumerist view of a high quality of life — once we're forced away from it — arts and culture, creativity, homemade art, those things can begin to come to the fore."

Ivey hopes government will play a role in making sure that happens.