Accessibility links
Hamas Accused Of Cracking Down On Opponents In Gaza, Hamas is busy working to reassert its authority and consolidate its control of the battered territory after the three-week Israeli offensive. The group's members have been cleaning up debris and handing out money, but are also accused of terrorizing political opponents.

Listen
Hamas Accused Of Cracking Down On Opponents 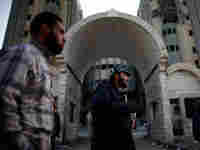 Hamas police and guards are reasserting their presence on the streets of Gaza City after the unilateral cease-fire. David Gilkey/NPR hide caption 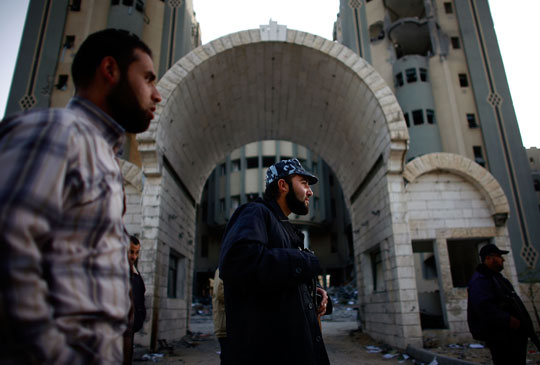 Hamas police and guards are reasserting their presence on the streets of Gaza City after the unilateral cease-fire. 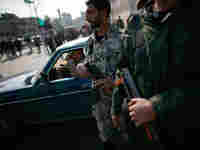 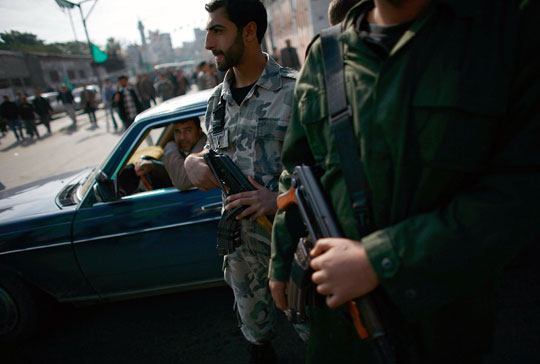 Hamas police and guards take up positions protecting government buildings and making sure traffic is flowing.

In Gaza, Hamas is busy working to reassert its authority and consolidate its control of the battered territory after the three-week Israeli offensive.

Hamas members have been cleaning up debris and handing out money to the wounded and the homeless. Hamas militants are also accused of cracking down on their political opponents.

Ahmed Youssif is one of the few Hamas leaders who dares to appear in public these days. Most of the rest are still living underground, fearful of Israeli assassination attempts. Youssif seems in an oddly giddy mood as he surveys the rubble piles near the Rafah tunnels along the border with Egypt — tunnels that Palestinians already have started to dig out, rebuild and, in a few spots, reopen.

"This means that this is the Phoenix rises again from the ashes," he says.

Tuesday night, Israeli fighter jets again bombed the Rafah tunnels. It was a response to a deadly ambush by Palestinian militants on an Israeli troops on a border patrol.

Elsewhere, Hamas bulldozers are working overtime digging out — and the group is busy paying out. Hamas loyalists are walking the drab corridors and recovery rooms at al-Shifa Hospital, passing out brightly colored envelopes of cash to the wounded. Fisherman Imad al-Najar writhes in pain, half-conscious, an IV stuck in his arm. He was shot in the chest and shoulder on the last day of the Israeli offensive. His brother Nader says the family is grateful for the Hamas help.

"We thank our brothers in Hamas for their efforts, although we know there are limited resources for them to give us," he says.

Hamas also has pledged cash to the thousands whose homes were ravaged in the Israeli offensive — 4,000 euros for a totally destroyed home, and 2,000 euros for a damaged one.

Hamas police officers are back on the streets — never mind that they and other government workers here have no useable or safe places to work. Most major government buildings were obliterated.

Ihab al Ghusain is with the Hamas Interior Ministry, which had its building and its minister annihilated in Israeli airstrikes.

"Even if we don't have buildings, we have difficulties," he says. "But we didn't stop, and we are still in charge."

Hamas also is affirming that it is still in charge in other, more brutal ways.

Abdul Kareem, who didn't want his full name used for safety concerns, props himself on a crutch and shows the deep black and blue marks that completely cover both legs from his buttocks to feet. His back is marred with wide bruises, and his left arm is fractured. He says that a few days into the cease-fire, Hamas security men suddenly grabbed him from behind as he entered Shifa Hospital to visit a wounded friend. The Hamas men, he says, then took him to a building under construction next to the hospital where they beat him senseless. There was no questioning or interrogation, he says; they just clobbered him until he was half-conscious.

"They hit me with their hands," he says. "They beat me with pieces of metal and thick, wooden rods. They beat me up and hadn't asked me any questions. I asked them, 'Why are you beating me? Why am I here?' And every time I started to talk, they just said, 'Shut your mouth, don't say a word' and beat me more and more."

Abdul Kareem, 30, acknowledges he was active in Fatah, the bitter political opponent of Hamas whose members were violently run out of Gaza in 2007. But he says he has no idea why Hamas abused him other than to intimidate and send a message to potential rivals.

Hamas Interior Ministry official Ghusain dismisses the abuse charges as propaganda and lies by Fatah to distract from its faltering popularity.

But an investigator with a Palestinian human rights group here, who asked not to be identified out of security fears, says his group is probing 35 cases of severe beatings just like that of Abdul Kareem. They are also investigating dozens of cases of arbitrary arrests, as well as six political killings, he says. The investigator says all attacks were carried out by Hamas militants against Fatah activists and political opponents in the past three weeks.