Accessibility links
National Debt For Beginners The Obama administration says deficit spending is the only way to escape the current recession. Opponents in Congress say that approach mortgages the future. Who's right? Two economists, including a former chief of the International Monetary Fun, cover the basics.

Simon Johnson, former chief economist of the International Monetary Fund, and James Kwak produced this report in collaboration with NPR's Planet Money. You can find more from Johnson and Kwak on their Web site:

In October 2008, the unofficial National Debt Clock in New York City had to add a "1" in the dollar sign field to accommodate the total debt count of $10.2 trillion. Mario Tama/Getty Images hide caption 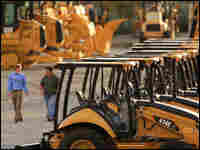 Companies like Caterpillar stand to benefit from the U.S. plan for deficit spending on infrastructure. In January, Caterpillar announced 20,000 layoffs, roughly 18 percent of its workforce. David McNew/Getty Images hide caption

With the annual U.S. government deficit recently projected at $1.2 trillion (not counting additional spending expected from the fiscal stimulus package now before Congress) and President Barack Obama warning about "red ink as far as the eye can see," government debt is once again near the top of the policy agenda. Which raises the question: What is government debt? And what's so bad about it?

What Is Government Debt?

For this article, we'll be talking only about debt issued by the federal government, not by state and local governments.

Let's say the federal government projects that it will need $100 billion more than it's bringing in from its existing tax programs. The government could raise taxes by enough to cover the shortfall. But that could be politically unpopular. It would also leave people with less disposable income. As a result, they'd spend less, so businesses would make less, so they'd lay people off, so they'd spend less, and so on. This does not mean that it is never a good idea to raise taxes, only that it is not a reliable way to close budget gaps.

Another way to close a budget gap is for the Federal Reserve to "print" another $100 billion or so, but that can lead to inflation. Imagine there were the same amount of stuff in the world, but suddenly everyone had twice as much money: The price of everything would simply double, and no one would be any better off.

Instead, governments prefer to raise money in the credit markets, which means that they issue bonds, just like private companies. A bond is a promise to pay money in the future; for example, a 10-year bond is a promise to pay a flat amount (the face value) in 10 years, and a percentage of that flat amount each year until then. When a government issues bonds, investors bid to buy those bonds; the amount of money they pay is therefore the amount that the government raises. (For more on bonds and bond yields, see Interest Rates for Beginners.) Now that you understand what government debt is, it's time to ask:

It is accepted among virtually all economists that some government debt, sometimes, is a good thing. In a recession, tax revenues fall, and you need more money for social programs such as unemployment insurance, so the government should go into deficit. Fiscal conservatives, however, would say that these deficits during hard times should be balanced by surpluses during good times, so that over the long term the government budget remains in balance.

While this simple notion is appealing, there is no particular reason it must be true. Imagine that the government has some amount of debt, say 20 percent of its gross domestic product, or GDP, at the beginning of the year. Assume it retires none of the debt, but it does pay off the interest on the debt, and its budget is exactly balanced. The next year, debt will be less than 20 percent of GDP, because GDP almost always goes up. Clearly the government can sustain the same level of debt by running small deficits forever, as long as GDP is increasing, because GDP is a close proxy for the tax base. And the higher your level of economic growth, the more additional debt you can take on each year.

There are some negative effects of government debt, to be sure. Government bonds compete with corporate bonds for investors' money, which pushes up interest rates for everyone. And if the government is absorbing a larger proportion of the capital available, there is less for the private sector.

But debt is not necessarily all bad; as with households and companies, it depends on what you are doing with the money you borrow. For example, it can make sense for you to borrow money to pay for college or professional school, because higher education increases your lifetime earning potential. For many people, the increase in expected earnings more than compensates for the cost of the debt.

Whenever you hear someone say, "The government should be run like a company: Your revenues have to exceed the amount you spend," you should stop listening, because that's not how companies are run. On the other hand, government makes no distinction between expenditures that are productive investments bound to grow the tax base — roads, bridges, schools, school loans, basic research, etc. — and expenditures like entitlement programs.

The new Troubled Asset Relief Program, designed to rescue American financial institutions, actually made things more complicated, because now there is another category of government expenditure. With TARP, the government is acting like a bank, or actually a private equity fund, buying shares in private-sector companies and paying for the investments with borrowed money. Those investments all have value, and the government is going to recover that value at some point by selling its shares back to the banks. But many people probably see TARP simply as $700 billion that is gone forever. The Congressional Budget Office projected the final loss at $180 billion (calculated as the amount Treasury is paying for the securities, minus the value of the estimated cash flows Treasury will get from them).

How Much Debt Is OK?

The key issue is fiscal sustainability: the ability of a government to pay off its debt in the future, essentially by shifting its current obligations onto future taxpayers. (Again, borrowing money that your children will have to pay back is not necessarily a bad thing; it depends on whether you use it to improve the world they will live in.) Investors start getting worried when government debt looks like it will keep getting bigger (as a proportion of GDP), demographic trends look bad (with far more retirees than workers), and there seems to be no political appetite to confront the problem. If the debt gets too large, the government will eventually face a choice between several unpopular measures — including defaulting on the debt or imposing severe austerity in order to afford the debt payments.

In the U.S., the last time fiscal sustainability was a major concern was the 1980s, when annual government deficits — the amount by which spending exceeded tax revenues in a given year — reached a post-World War II high of more than 6 percent of GDP (data, p. 316). Deficits began falling in the mid-1980s, and especially after the end of the 1990-91 recession and the beginning of the Clinton administration, but total debt — the cumulative amount owed by the government — kept growing (because even small deficits still add to debt) until it peaked in 1996 at 67 percent of GDP (data, p. 126).

Still, the deficits that seemed so frightening in the 1980s were tamed by little more than a couple of moderate tax increases (by Presidents George H.W. Bush and Clinton) and the economic boom of the 1990s, to the point where the federal deficit faded as a political issue. And looking further back, even the World War II-related government debt — which reached 122 percent of GDP in 1946 — was paid down without much negative impact on the economy, thanks to strong demographic and productivity growth.

In this decade, however, the 2001 recession, George W. Bush's two major tax cuts, the Iraq War, and of course the current recession have weakened the government's fiscal position. Now the Congressional Budget Office is projecting a 2009 deficit in excess of 8 percent of GDP, a new post-World War II high. That's before counting the Obama administration's stimulus plan. In addition, Social Security and Medicare are expected to face funding shortfalls totaling in the trillions of dollars, beginning next decade.

No, Really: How Much Debt Is OK?

There are two plausible ways of resolving the argument over the sustainability of government debt, neither of which is conclusive. The first is empirical economic research. Here, the world's appointed authority is the International Monetary Fund, which is especially interested in analyzing debt sustainability because it is the institution that will be called in when government debts risk becoming unsustainable. The IMF has concentrated most of its attention on emerging-market countries, because it has been assumed both that developed countries are less likely to default, and that even if they did there is little the IMF, with its limited resources, could do about it.

That said, the IMF has done extensive research on debt sustainability, including attempts to estimate the sustainable debt levels for specific countries. Abdul Abiad and Jonathan Ostry, two IMF economists, have a paper on "Primary Surpluses and Sustainable Debt Levels in Emerging Market Countries" (this is their research, not official IMF policy), which outlines two analytical approaches to estimating debt sustainability — one based on a country's past performance at paying off debt, the other based on a model of economic fundamentals. Applied to a sample of 15 emerging-market countries, both the historical approach and the model-driven approach put the median sustainable debt level at around 30 percent of GDP (although across the sample the estimates range from less than 10 percent to more than 100 percent).

It would be a mistake to apply this single number to a country like the U.S., though. For one thing, developed countries in general can sustain higher levels of debt than emerging markets, among other reasons because they have higher revenue-to-GDP ratios. The IMF's September 2003 World Economic Outlook has some charts comparing government debt levels in industrial and emerging-market countries. Industrial countries in aggregate had public debt levels above 70 percent of GDP for most of the 1990s; yet no industrial country has defaulted on its debt in the post-World War II period. Empirical studies have shown at most a weak correlation between the amount of U.S. government debt and the interest rate the Treasury Department has to pay to borrow money.

The other way to see how much debt is too much is to ask the market. If investors think there is a risk that they won't be paid back, they will demand a higher interest rate, for the same reason that subprime mortgages have higher rates than prime mortgages. Interest rates on U.S. Treasury bonds are at historic lows, because people looking for a safe place to put their money are falling over themselves trying to lend to the U.S. government. The U.S. is able to borrow money cheaply despite everything we know about the recession, the government deficit, the Obama stimulus package and the looming retirement savings problems.

So the short answer to the question of how much debt is sustainable is simple: We don't know. If we were close to the edge of some fiscal cliff, the market would warn us, under ordinary circumstances. But these are not ordinary times: Due to the upheaval in all markets, there is a level of demand for Treasuries that is . . . how shall we put this . . . probably not justified by economic fundamentals, and as a result market signals don't work as well as they should. Right now, the markets are saying that the U.S. government is as good a place to lend money as any and are implicitly giving us time to sort out our fiscal problems. At what point that will change, though, no one can predict.