Accessibility links
Rudolf Buchbinder's Robust Beethoven Hailing from the classical-music capital of Vienna, Rudolf Buchbinder specializes in the composers who made his hometown famous. Hear him play an impassioned rendition of Beethoven's "Pathétique" Sonata in the studio of WGBH in Boston. 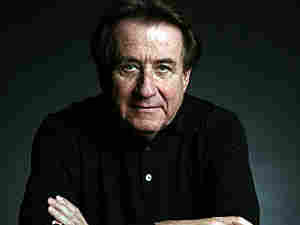 Most pianists who come to our studios for live radio performances will ask for an hour or more to warm up and acclimate themselves to the piano and the room. But Rudolf Buchbinder was ready to start taping in 10 minutes. I learned that this is perfectly in keeping with his musical way of life.

"I practice with my head," Buchbinder says, adding, "very little with my fingers." After half an hour of practice, when he's fully engaged, he says he gets exhausted.

Buchbinder is intense in many ways — he's a perfectionist who insists on absolute reverence for original manuscripts and has no time for publishers who add parenthetical fingerings or dynamics. He is intense at the piano, too, delivering a performance of Beethoven's Pathétique Sonata that absolutely teems with energy and power, even at its most tender moments.

There is an immense and focused force in Buchbinder's artistry, fueled by his physical strength and his profoundly deep convictions. And it is startling to see the power he invokes in Beethoven transform itself into a kind of flexible energy that gives the Johann Strauss Jr. arrangement its charm. Beethoven or Strauss, sparks fly.

Buchbinder mentioned that his perfectionism forced him to give up his hobby of painting — he felt he just wasn't good enough to keep at it. It did, however, force him to sit still, which is something he has trouble with. Buchbinder's stop at our studio was just a few hours before his performance of a Beethoven Piano Concerto at Symphony Hall with the Dresden Staatskapelle. At intermission, he would be jumping into a car, on the way to New York. Somehow, this high-voltage and intelligent pianist has found the balance required to stay focused while on the run.

Austrian pianist Rudolf Buchbinder's career began early, when he was the youngest student to attend the Vienna Academy of Music at age 5. After studying with Bruno Seidlhofer, Buchbinder went on to perform worldwide with some of the most famous orchestras and conductors, and became a regular at the Salzburg Festival. He has been a piano professor at Basel Academy of Music, and is the founding artistic director of the Grafenegg Music Festival in Vienna.

Buchbinder is renowned for his Beethoven interpretations, both in the concert hall and on record. He has made more than 100 recordings to date, including the complete Beethoven sonatas, both Brahms piano concertos and Haydn's complete piano works.

Buchbinder is also known for his piano purism, in particular an obsession with untouched musical scores. His comprehensive collection boasts many first editions and original documents, as well as 18 complete editions of the sonatas of his beloved Beethoven.