Accessibility links
Gitmo's 'Dangerous Detainees' Pose Vexing Problem When the prison at Guantanamo Bay, Cuba, is closed, some of its detainees may be moved to other countries; others will be prosecuted. But some cases are more problematic; there about 100 detainees whom the Pentagon says are too dangerous to free, yet they can't be tried for a lack of evidence. 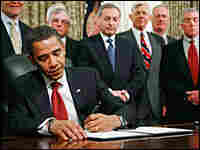 President Barack Obama signs an executive order to close down the U.S. prison camp at Guantanamo Bay, Cuba, as retired military officers look on in the Oval Office of the White House on Jan. 22. Mark Wilson/Getty Images hide caption 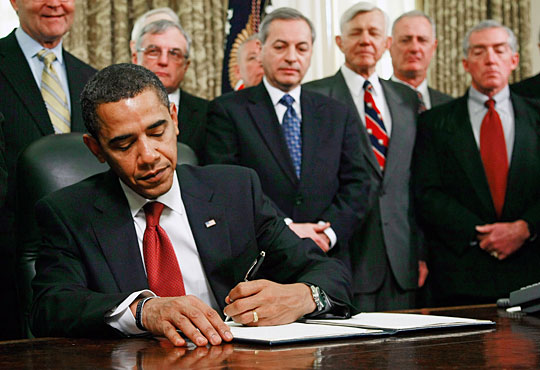 President Barack Obama signs an executive order to close down the U.S. prison camp at Guantanamo Bay, Cuba, as retired military officers look on in the Oval Office of the White House on Jan. 22.

When President Barack Obama signed an executive order to close the U.S. prison camp at Guantanamo Bay in Cuba, he authorized a task force to review, among other things, where to send the roughly 245 detainees still held there.

Some may be returned to their home countries or a third nation; others likely will be prosecuted. But a third category may prove the most problematic to resolve. That's a group of roughly 100 detainees whom the Pentagon says are too dangerous to release and yet can't be tried for a lack of evidence.

"I have one question. What are their names?" asks Sabin Willet, a Boston lawyer who has represented Guantanamo detainees for nearly four years.

He criticizes the Pentagon for not naming the detainees who fall into this category or stating what kind of threat they represent. Pentagon officials say simply the threat is "high."

Willett sharply questions the assertion that there are detainees who can't be tried and can't be released: "Who's decided that they're too dangerous to hold and on the basis of what?

"Are they really saying we have these people down there and the only evidence on them is what we tortured out of them, which we can't use in a prosecution?"

Willett says there is little reason to believe statements that these men are too dangerous to release. After all, about 500 Guantanamo detainees — men whom the Bush administration referred to as terrorists — have been released already.

While most of those freed have melted into obscurity, the Pentagon claims that several dozen are now in terrorist operations.

Bradford Berenson, a Washington lawyer who helped draw up the policies for the military commissions at Guantanamo, says the U.S. government has been "tricked" into releasing "senior al-Qaida operatives."

After release from Guantanamo, he says, these people "have gone back to the battle and back to planning attacks on the United States and its allies."

Many analysts — military and civilian — say there has to be a better way to gauge the risk posed by these so-called dangerous detainees. There is increasing concern among human rights groups, defense lawyers and others that the approximately 100 men may fall into some legal black hole.

David Rittgers, a legal policy analyst at the Cato Institute, says the U.S. doesn't really have to let the men go — or prosecute them — under the law of war.

"We can hold these people until the cessation of hostilities," says Rittgers. "And the law of war supports that, and I don't take credibly claims that that's somehow inhumane to hold these people who are combatants."

Rittgers says the troubling part is that no one knows when the war on terrorism is going to end. That's just one of the variables that President Obama's task force on Guantanamo is going to have to consider.

Rittgers says he'd like to see Guantanamo closed and some of the detainees tried in federal court. But, he says, it's likely the members of the Guantanamo task force may very well agree that there are some men the U.S. cannot try in any courtroom.

If that happens, Rittgers says President Obama will need to explain it fully and carefully to the American public.

"If that's done right, if that's done openly and just with an eye to convincing people that we can't let them go, then we will end up keeping some of these people under those conditions," he says.

Obama Administration And The Credibility Issue

Berenson, the lawyer who helped develop policies for Guantanamo's military commissions, says the new administration will have more luck explaining the situation than the Bush administration.

"I don't think people around the world or interest groups in our own country are nearly as suspicious of the new administration's intentions and basic background beliefs as they were of the Bush administration," he says.

As a result, Berenson says, if the Obama administration comes to a position that is similar to that of the Bush administration — regarding who needs to be detained and how and why — it will be able to take that position "with greater credibility and greater authority than the outgoing administration was."

Prisoners' Fates Still In The Balance

But holding someone without charge or trial goes against the grain of everything the U.S. is supposed to stand for, says Willett, the lawyer who represents Guantanamo detainees.

"Let's also be honest about it means," says Willett. "When does a person stop being too dangerous to release? If it's a life sentence, we better be honest with ourselves in saying we've become a country that holds people in a prison for life because someone in intelligence has a suspicion."

The Pentagon says a comprehensive interagency review of each detainee will be conducted. After that, the prisoner's fate will be determined on a case-by-case basis.