Accessibility links
Paper Cut: Missouri College Embraces E-Textbooks On campuses around the country, professors and students are selecting digital versions of textbooks that can be read off of a computer screen. As higher education costs skyrocket, Northwest Missouri State is the first school to try to go entirely book-free. 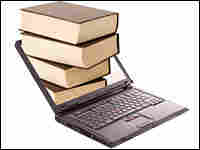 College students already go online for music and news — now some are adding textbooks to the list. iStockphoto hide caption 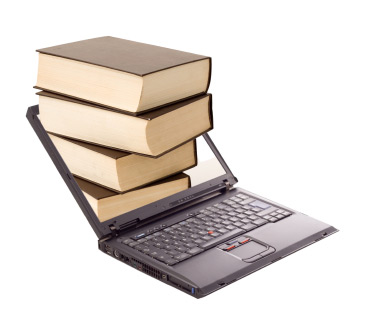 College students already go online for music and news — now some are adding textbooks to the list.

The college textbook is on track to becoming a relic of the paper-and-ink era. On campuses around the country, professors and students are selecting digital versions of books that can be read off of a computer screen.

Most college students are used to going online for music, videos and news — so why not textbooks?

One college in rural Missouri is the first trying to go entirely book-free.

At Northwest Missouri State, all students are issued a laptop when they arrive on campus. Just before his business finance class begins, junior Kevin Green takes out his laptop and clicks on his textbook.

"I've read it some. I find it easy to just go through it as [the instructor] discusses it in class and highlight things as he brings them up," Green says.

Green is one of 500 students testing out digital textbooks this semester. And they're wondering: How will the e-books change the way they study?

"I like having the book in front of me, so I can like flip back and forth really fast and, like, put Post-it notes up in the corners of important pages," she says.

Some e-textbooks are just on-screen versions of the bound copies. But the newest books are interactive — you can search, mark pages, highlight, and cut and paste passages. You can share notes in a kind of social network with the rest of your class — or even click on a video.

The new generation of textbooks is trying to be in tune with the way students learn in the age of Wikipedia and YouTube. And textbook writers will have to keep up, says Frank Lyman of CourseSmart, a digital distributor that's working with nine major publishers.

Not everyone is ready to relinquish the heavy old tomes. Northwest Missouri State President Dean Hubbard says when he discussed the plan to move away from physical books on campus, some professors had tears in their eyes.

"And the philosophy professor talked about books that were so important to him that he took them and had them leather-bound," Hubbard says. "But then he ended up saying, 'This is the way things are going, and we're going to go with it.'"

Professors across the country are assigning e-books. Eighteen percent of college students have purchased one, according to the National Association of College Stores. But Northwest Missouri State is in a unique position to go entirely digital: In addition to the laptops, students rent all their textbooks from the college. So when a comprehensive selection became available digitally, Hubbard decided to make the switch.

"The timing is just right. Everybody is anxious about the cost of higher education going up," he says.

College textbooks are part of that. One book can cost upward of $200. E-book versions cost about half that.

Some students still need convincing, though. About half at this school say they still prefer physical textbooks.

But human resources instructor Allison Strong says she's already noticing that students are more likely to bring their laptops than textbooks to class.

"I just remind them again, you know, review this chapter, probably more so than I did so before," she says, "because I think they're actually going to read it more this time."

As students trade their books for laptops, publishers and academics alike are watching the transition, which could mean profound changes for higher education.