Accessibility links
America's Beauty Is In Its Diversity In sixth grade, Alaa El-Saad decided to start wearing the hijab, a religious head covering for Muslim women. Despite some trepidation, she found her classmates supported her choice. Now El-Saad believes being different is part of being American.

Listen
America's Beauty Is In Its Diversity 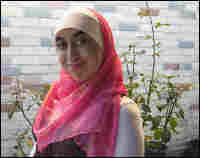 Fifteen-year-old Alaa El-Saad is a student at John B. Connally High School in Austin, Texas. She hopes to study medicine and become a pediatrician. El-Saad says she wants help children learn to embrace their differences and accept who they are. Courtesy Alaa El-Saad hide caption

America is built on the idea of freedom, and there is no exception for Muslim women. I believe in the freedom of religion and speech. But mostly, I believe it's OK to be different, and to stand up for who and what you are. So I believe in wearing the hijab.

The hijab is a religious head covering, like a scarf. I am Muslim, and keeping my head covered is a sign of maturity and respect toward my religion and to Allah's will. To be honest, I also like to wear it to be different. I don't usually like to do what everyone else is doing. I want to be an individual, not just part of the crowd. But when I first wore it, I was also afraid of the reaction that I'd get at school.

I decided on my own that sixth grade was the time I should start wearing the hijab. I was scared about what the kids would say or even do to me. I thought they might make fun of me, or even be scared of me and pull off my headscarf. Kids at that age usually like to be all the same, and there's little or no acceptance of differences.

On the first day of school, I put all those negative thoughts behind my back and walked in with my head held high. I was holding my breath a little, but inside I was also proud to be a Muslim, proud to be wearing the hijab, proud to be different.

I was wrong about everything I thought the kids would say or even do to me. I actually met a lot of people because of wearing my head covering. Most of the kids would come and ask me questions — respectfully — about the hijab and why I wore it.

I did hear some kid was making fun of me, but there was one girl — she wasn't even in my class, we never really talked much — and she stood up for me, and I wasn't even there! I made a lot of new friends that year, friends that I still have until this very day, five years later.

Yes, I'm different, but everyone is different here, in one way or another. This is the beauty of America.

I believe in what America is built on: all different religions, races and beliefs. Different everything.

>Independently produced for Tell Me More by Jay Allison and Dan Gediman with John Gregory and Viki Merrick.