Accessibility links
Doctors Tame One Of Cancer's Deadliest Forms The chances of surviving cancer have been increasing in recent years. One of the most dramatic success stories in cancer care involves multiple myeloma — among the deadliest types of the disease. Doctors say new drugs can suppress the bone marrow cancer for years. 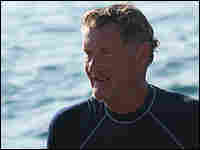 Documentary filmmaker Hardy Jones was diagnosed with multiple myeloma in his late 50s. New drugs have helped him keep the cancer at bay for more than five years. Courtesy of Hardy Jones hide caption

The chances of surviving cancer have been increasing in recent years. One of the most dramatic success stories in cancer care involves a little-known cancer called multiple myeloma that had been among the deadliest types of the disease.

Myeloma is a painful bone marrow cancer that affects white blood cells that make antibodies. When these cells become malignant, they crowd out other bone marrow cells. That weakens bones so much that patients can break a bone just stepping off a curb.

Hardy Jones, a documentary filmmaker and recreational surfer, was diagnosed with multiple myeloma when he was almost 60. He knew something was wrong when he lost his usual energy.

"I just couldn't get that stoked feeling, no matter what I did," Jones says. "I was just always draggin'." He could barely trudge up the hill from his favorite surfing beach, carrying his surfboard and wet suit.

His doctor ran some tests and mentioned that Jones might have cancer. While waiting for the results, Jones started reading up on possibilities. Some were scary.

"I vowed that I would go in there and no matter what the diagnosis was, I'd be cool," Jones says. "And when the doctor said, 'Well, it's multiple myeloma,' I said, 'Oh, my God!' I totally cracked. I wasn't cool. But he said, 'Stop it! Stop it! This is not a death sentence!' "

Now there are easy-to-take drugs that can keep myeloma at bay for years.

"Everybody responds, and the majority have a very significant response," says Dr. Ken Anderson of the Dana Farber Cancer Institute in Boston. "So it's clearly a new day in myeloma."

Jones' doctor put him on thalidomide five and a half years ago. He's still doing well.

Successes like this touched off an explosion of drugs effective against myeloma, some related to thalidomide and others that work in a different way.

"The excitement here is that we have six new treatment options that we didn't have only five years ago," Anderson says. "And we have three additional treatment strategies that are in the last stages, so-called phase three clinical trials, that likely will create additional options."

Having drugs to mix and match gives myeloma patients hope of remissions even after they relapse — something unusual in cancer treatment.

"It really offers for us the opportunity to treat patients even when their myeloma has come back not once, but perhaps even many times," Anderson says.

Doctors can't yet cure myeloma, but they're turning it into a disease that patients can live with for many years. The median survival rate has recently increased from about three years to seven or eight.

U.S. and French researchers are about to launch an international study to see if the new drugs are better than bone marrow transplants, which put patients through a grueling regimen of toxic chemotherapy. Officially, transplants are still the first-line treatment for myeloma, although many patients such as Jones are looking at transplants as a last resort.

"Now the question becomes relevant: Do you actually need a transplant?" Anderson says. "That question couldn't even have been asked before."

The picture isn't all positive. Dr. Brian Durie of the International Myeloma Foundation says more patients are being diagnosed with the disease.

"In the United States, there are approximately 20,000 new patients diagnosed each year," Durie says. "The incidence used to be 12,000 new cases a year. So it's a significant upward trend."

But Dr. Vincent Rajkumar of the Mayo Clinic says the increase in numbers is from aging of the population, not a real increase in the rate of myeloma.

There's also debate about whether environmental toxins are causing myeloma.

"The commonest chemical that has been linked to myeloma is dioxin," says Durie. That's why some Vietnam veterans are thought to have gotten myeloma — from exposure to Agent Orange. The Department of Veterans Affairs has acknowledged the link.

But among the civilian population, the picture isn't as clear. Some studies are emerging that civilians exposed to herbicides and pesticides do have a higher risk of myeloma. But it's difficult to pin down people's exposures to environmental toxins and relate those exposures to the incidence of a rare disease.

The bottom line is that experts say it's too soon to conclude that environmental toxins are the cause.