Accessibility links
Otterly Adorable, But Born To Be Wild Who doesn't love otters? Their little ears, googly eyes and built-in smiles are just a few of the charms of these increasingly rare creatures. But a wild animal is still a wild animal, no matter how cute it might be. 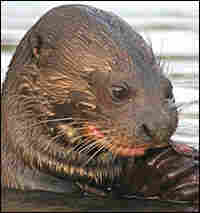 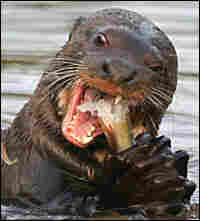 Like many of my friends, I have always had a thing for otters. Their sinuous bodies, topped by a flat head with tiny ears, googly eyes and a broad, built-in smile, satisfy something in my soul. The Holy Grail of otters is the giant otter, the rarest mammal in the Amazon. Fewer than 5,000 still exist, most of them on the northeast coast of South America. I never thought I would get to see — much less touch — a giant Amazon otter, anywhere, anyhow, anytime.

But I found my way to Guyana on a bird-watching trip, and to Karanambu Ranch on the Rupununi River, and somewhere in all those lovely, rolling vowels there lives a woman named Diane McTurk, who raises and releases orphaned giant otters. It is the labor of Sisyphus to raise a highly social, aquatic, muscular and occasionally dangerous animal to release age, and Diane had my instant respect. I watched her as she knelt by the river's edge, caressing one of the orphaned otters, and I knew I had to touch that animal, too.

Because my curiosity and affection for animals almost always overrides my fear, I tussled with the otter as she did, petting and playing with him. They are mammalian Möbius bands (Escher drawings), endlessly rolling and turning in on themselves in sinuous loops, never still, flowing like furry water. I adored messing with that animal. The only problem being: Though hand-raised, it was still a wild animal. I tell my kids never to touch a wild animal.

At one point, the giant otter paused in his lolling around, raised his head and stared briefly at me in what I realized too late was a direct threat. A lightning fast one, but a warning. I was squatting next to him, tousling his silky fur, and suddenly sensing that he was displeased, I withdrew my hand and pulled both arms in close to my body. But it was too late. His big, flat head lashed out like a snake's, and those fearsome jaws closed around my right wrist.

His mouth was a spiked vise, and the pressure from one canine broke the skin through the double cuff of my nylon shirt. Wow. In the spectrum of otter bites, I'm sure what I'd just gotten was a warning nip. The pressure was nevertheless bruising, tremendous. These things grow to 6 feet and 70 pounds; chew the heads off piranhas, open up turtles with those jaws. One nip, and it was over, and I took him at his word and didn't mess with him any more. I recalled, a bit too late, the factoid that otters, as a group, bite their keepers more than any other zoo animal. I was glad that no direct contact had been made between his tooth and my skin, glad that I had made it a point to wear long sleeves even in the suffocating heat.

I picked at the little giant otter tooth hole in my wrist for the rest of the trip, hoping to bring a visible scar back for my family, but alas it healed nicely and is now just a tiny whitish spot. Inspired by the event, I have drawn up a list of insects, reptiles, birds and mammals that have bitten me in my 50 years — 75 species and counting. Amazon giant otter — that one gets a gold star.