Accessibility links
Counting The Dollars, One Paint Job At A Time Because body shop workers are paid by commission, not by the hour, paychecks go up and down with the volume of cars out the door. At Quality Colors, an auto body shop in Dallas, one painter is trying to keep his life on track despite the drop in business.

Listen
Counting The Dollars, One Paint Job At A Time 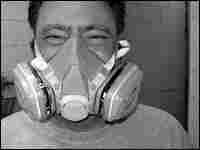 Scott Pyterek, a painter for Quality Colors Collision and Pro Shop in Dallas, Texas, has seen his paychecks fluctuate with the volume of work. Wade Goodwyn/NPR hide caption 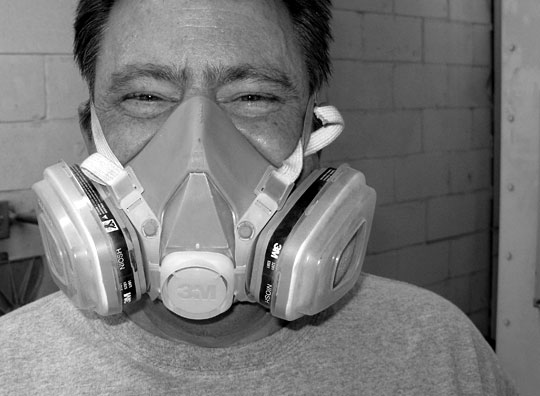 Scott Pyterek, a painter for Quality Colors Collision and Pro Shop in Dallas, Texas, has seen his paychecks fluctuate with the volume of work.

NPR's Wade Goodwyn is following the economic fortunes of Quality Colors Collision and Pro Shop in Dallas as it winds its way through the recession. This is his second story about the auto body shop.

Walk around inside the garage of Quality Colors and it's clear that even though there's a recession, drivers haven't stopped smashing into one another. One guy was T-boned, another driver obviously wasn't paying attention when traffic abruptly came to a halt, and a third motorist didn't see the concrete light pole while backing out of the 7-Eleven.

Despite the carnage, business is off here. And because the workers are paid by commission, not by the hour, paychecks go up and down with the volume of cars out the door.

"Well, I am concerned about the economy, and me and my wife — we live day by day," says 45-year-old Scott Pyterek, a painter. He and his wife, Michelle, have two cars that are paid off and a house they bought 12 years ago. They don't have any kids to worry about.

It's been a rough week economically. Tens of thousands of employees — from Caterpillar to Home Depot to Sprint Nextel — were informed their jobs were over. Even for Americans who still have their jobs, the uncertain economy is sowing anxiety.

As any American who's lost his or her job in the last two or three months can tell you, having an erratic paycheck is a lot better than having no paycheck at all.

Life With No Savings

The Pytereks have no debts to speak of, but no savings either. Like millions of other American families, it takes both of their incomes to make the mortgage and pay bills. A painter with Pyterek's experience can make between $30,000 and $80,000 a year, depending on volume.

Pyterek's job is safe for the time being, but he and his wife are worried about her job as an interior designer for an upscale homebuilder. He says if she lost her job, they'd lose their house.

"It would be tough. We'd probably last a couple of months before we'd have to make a drastic move with our mortgage," Pyterek says.

The company Michelle Pyterek works for is based in Frisco and Houston. "They employ 300 people. Or they used to employ 300 people, but they've been having layoffs every couple of weeks," he says. "And just in my wife's department, they've already released two ladies out of five — and we don't know what they're going to do next."

There's not a lot of fat to cut in the Pytereks' budget.

The couple's one extravagance is eating dinner out once a week. "That's basically our entertainment — going to Chili's or something like that on a Friday or Saturday," Pyterek says.

With the deteriorating economy, it has become a popular feature on the local news to highlight various ways in which families can save money. But clipping coupons or giving up their one night out is not going to make the difference for the Pytereks if they only have his salary coming in.

Watching laid-off co-workers file out of the door week after week has left his wife shaken and depressed. Pyterek knows they're helpless to affect the situation. He does the best he can to keep morale up at home.

"Yeah, I try to reassure her just about every night when she starts talking negative," he says. "I try to tell her to think positive."

If they lost the house, Pyterek says they'd move into an apartment and adjust. He'd still have his job painting at the body shop. For customers, Quality Colors is simply the place where for 25 years they've been able to get reliable auto body work done. For the employees, however, in this economy it's their safety line to the life they've come to enjoy.