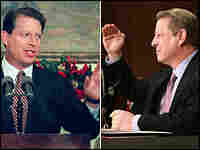 Back To The Future? Al Gore speaks about the Kyoto Treaty in 1997 (left) — and in the Senate on Wednesday. Luke Frazza (left) Mark Wilson/AFP/Getty Images hide caption

When Vice President Al Gore returned from Kyoto, Japan, with a climate treaty in 1997, it was already a dead letter. The Senate, which ratifies treaties, strongly opposed the deal even before Gore signed it.

On Wednesday, Gore returned to the Senate to offer advice about how to arrive at a different outcome as a new climate treaty is negotiated this year in Copenhagen, Denmark.

The federal calendar is packed with pressing business in 2009. One of the toughest deadlines is to lay the groundwork for the international climate talks in Copenhagen.

Sen. John Kerry (D-MA), chairman of the Senate Foreign Relations Committee, reminded his colleagues that the new treaty will be negotiated in December.

"That means there is no time to waste," Kerry said. "We must learn from the mistakes of Kyoto, and we must make Copenhagen a success."

To help set the tone, Kerry invited his old friend and colleague Gore to offer the Senate advice.

First, Gore said, Congress needs to settle on domestic actions that will reduce our own emissions and make us credible on the international scene. That's starting to happen with the stimulus package — which the House approved later Wednesday — and Congress has even bolder plans for later this year.

But Gore also acknowledged that one reason the Senate balked at ratifying the Kyoto Treaty was because other major emitters in the world had no obligations to cut back.

"The very fact that developing countries like Brazil, Indonesia, China — which is in its own category — have begun to take steps," Gore said, "I think that makes it a very different situation."

Since Kyoto, China has overtaken the United States as the world's largest emitter of carbon dioxide.

On the one hand, the rapid construction of coal-fired power plants is driving China's economic development. But Gore says that some in the Chinese government now recognize that runaway growth, if it comes with runaway climate change, could dry up the country's water supply.

"The great rivers of Asia, the Indus and the Ganges and the Brahmaputra and the Salween or the Irrawaddy, the Mekong, the Yangtze and the Yellow — all originate in the same ice field," Gore said.

"And 40 percent of the population on Earth gets 50 percent or more of its water from this melting pattern."

That ice field could be gone in 2035 as a result of climate change. That potential disaster is not going unnoticed, Gore said.

"Recent statements by Chinese leaders have made it very clear that they are changing, and changing rapidly," he said.

But so far, China has not promised to meet any binding limits on carbon dioxide emissions. That was what the Senate demanded back in 1997, when the Kyoto Treaty went down in defeat.

After the hearing, Alden Meyer of the Union of Concerned Scientists underscored just how much the international landscape has changed since Kyoto.

"We've seen a number of countries in the last year or so put forward very specific proposals for what they're prepared to do to reduce their emissions," Meyer said. "We've seen that from South Africa and Mexico and Brazil and China and India ... . The question of 'binding' is a tricky one."

Meyer says that, unfortunately, a lot of senators don't realize that developing nations are doing as much as they are.

"It surprises senators, for example, when they find out that China has in place today stronger fuel economy standards for new cars sold in China — stronger than the Congress adopted last year for the U.S. in 2020," Meyer said.

On Wednesday, Gore started selling members of the Senate on the need to act, and to act fast.

And while he had a very sympathetic audience at the Foreign Relations Committee, it takes 67 senators to ratify a treaty — and it's clear that there's a lot more convincing left to be done.