Accessibility links
Illinois Senate Votes To Oust Blagojevich The Illinois governor gave his own closing arguments at his impeachment trial before the state Senate. But his words failed to convince lawmakers, who found him guilty of abuse of power. Lt. Gov. Patrick Quinn stands ready to be sworn in immediately as governor. 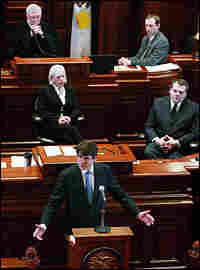 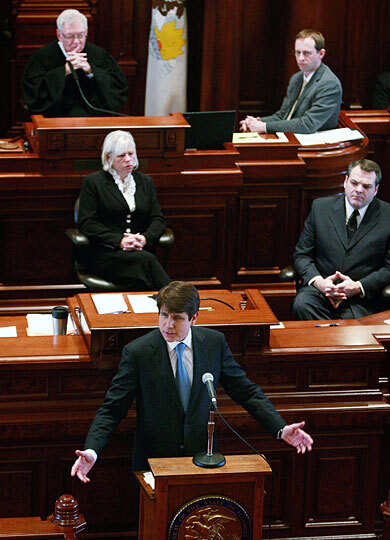 Illinois Gov. Rod Blagojevich addresses the state Senate during his impeachment trial Thursday in Springfield. Blagojevich has been accused by federal authorities of corruption, including offering to sell the U.S. Senate seat left vacant by President Obama.

If Rod Blagojevich was vain and over the top, the new Illinois governor, Pat Quinn, 60, is a mostly humor-challenged pol. He is an outsider who spent many years, and many elections, trying to make it on the inside. He champions the little guy, the powerless, with his longtime support for citizen initiatives, and has spent a career battling special interests.

Illinois Gov. Rod Blagojevich was removed from office Thursday after the state Senate voted 59-0 to find him guilty of abuse of power at his impeachment trial in Springfield.

Senators also voted unanimously to bar Blagojevich, a Democrat in his second term, from ever again holding public office in Illinois.

"The ordeal is over," Quinn told lawmakers.

Blagojevich made a last stand Thursday, appearing before state legislators for the first time to insist that they had no proof that he was involved in any illegal activity.

Blagojevich's statement represented his closing argument at a trial that he had boycotted until Thursday, saying the proceedings were biased against him.

"You haven't proved a crime and you haven't given me a chance to disprove a crime," Blagojevich said during a rambling speech that lasted nearly an hour.

Blagojevich, 52, has been under pressure to resign since he was arrested Dec. 9 on federal charges of solicitation of bribery and conspiracy, but he has repeatedly maintained that he did nothing wrong. The Illinois House impeached him on Jan. 9, setting the stage for the Senate trial.

The governor attacked the impeachment process throughout, saying it was "rigged."

"How can you throw a governor out of office who is clamoring and begging and pleading with you to bring witnesses in and prove his innocence?" he said. "Let me show you that I'm innocent, and I didn't do anything wrong."

House-appointed prosecutor David Ellis has tried since Monday to show that Blagojevich abused his power as governor. Before resting his case on Wednesday, Ellis played recordings of government-intercepted conversations in which the governor allegedly demanded campaign contributions in exchange for signing legislation.

Ellis also called witnesses, including an FBI agent, who vouched for the accuracy of excerpts of some of Blagojevich's conversations, which were included in the federal criminal complaint.

The complaint and an accompanying affidavit, which were included in the articles of impeachment, allege Blagojevich was involved in a number of corrupt acts, including a scheme to trade an appointment to President Obama's vacant Senate seat for money, contributions or a lucrative job.

At one point, he recounted his life story as the son of immigrants and told of his Serbian father's internment in a Nazi prison camp. In contrast, "I have been blessed to live the American dream," he said.

Before Blagojevich gave his closing arguments, Ellis said the governor was guilty of widespread abuse of power.

"The governor's own words demonstrated, time and time again, that he saw his ability to appoint a U.S. senator as a golden goose, as a bargaining chip to be leveraged for his own personal and political well-being," he said.

Blagojevich has been charged with conspiracy to commit fraud and solicitation of bribery in connection with a deal involving the Illinois Finance Authority. So far, a grand jury has not issued an indictment, and no trial date has been set.

Earlier this week, Blagojevich took his case to the public in a media blitz that had him appearing on numerous talk and news shows from Good Morning, America to Larry King Live.

NPR's David Schaper and The Associated Press contributed to this report.