Accessibility links
Student And Teacher Podcasters: Here's What You Need To Know About Music : The Students' Podcast Music can be a powerful tool in storytelling. It can set an emotional backdrop or give a sense of rhythm and tone to a story. Music can be that final piece of the puzzle, the piece that ties everything together. But too often, music isn't used at the right time or place in the story – or the music is all wrong for the moment. Composer and podcast host Ramtin Arablouei shows us when to use music in your podcast. 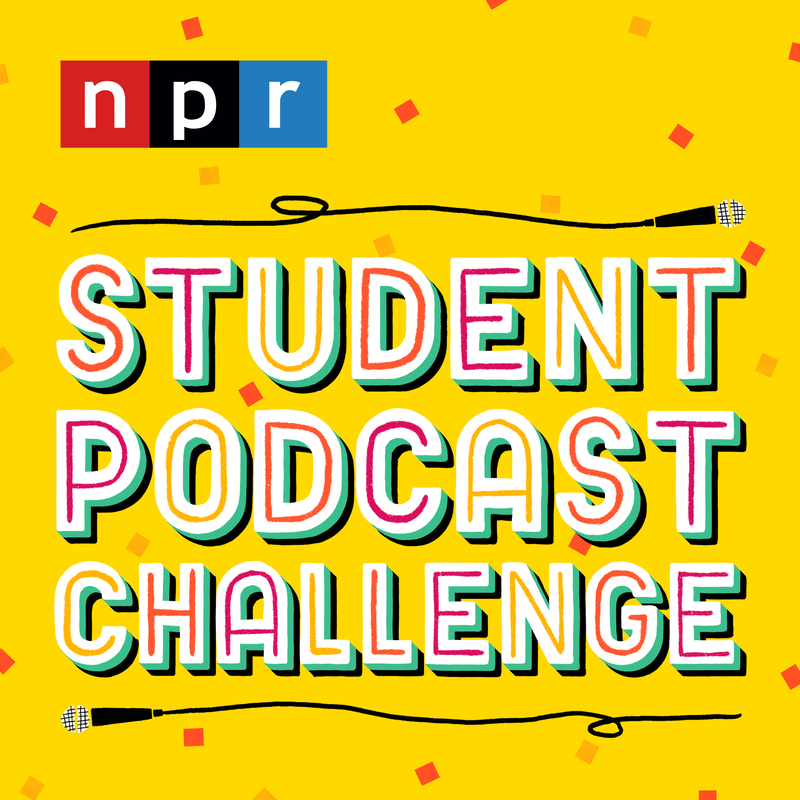 < Everything You Need To Know About Using Music In Your Podcast

MIGAKI: Yeah. You want to start the podcast?

MIGAKI: And I'm Lauren Migaki. You're listening to NPR's podcast about the STUDENT PODCAST CHALLENGE.

PIERRE: Yeah, we're here every week with tips and tricks to help you make an amazing podcast.

MIGAKI: Today on the pod...

MIGAKI: All right. So this is our theme music. And just like your favorite TV show, we play it every week, usually at the beginning.

PIERRE: So not every podcast needs to have music. We use this theme song every week, you know, just to add a little something-something (ph) to spice it up.

MIGAKI: Yeah, get a little funky.

MIGAKI: But if you're trying to use music in your entry for NPR's STUDENT PODCAST CHALLENGE, our lawyers want us to repeat some of the rules here.

PIERRE: Yep. So any music or sound effect that you use, they have to be the original works of students and teachers.

MIGAKI: So that means that the students have to write and perform all of their music.

PIERRE: Yeah. And here on the podcast, we also know a little something about original music. Actually, hey, DJ, can you bring that song back?

MIGAKI: So we asked musician Sam D'Agostino to create something for us that sounded really fun.

PIERRE: Yeah. But other podcasts - they can sound completely different.

PIERRE: This is from NPR's History podcast. It's called Throughline.

RAMTIN ARABLOUEI, BYLINE: So we were doing a show about history that's connected to current events. So the goal for trying to create a theme song is creating a certain atmosphere or feel that gets the audience to understand, like, what they're about to consume.

MIGAKI: Yeah. And he co-hosts that podcast with Rund Abdelfatah.

PIERRE: From the beginning, they knew they were planning on talking over the music, so they didn't want the music to be too overpowering. Like, check this out. You see how we're talking over the theme song right now and how you can still hear what I'm saying?

MIGAKI: I can hear you.

RUND ABDELFATAH: You're listening to Throughline from NPR.

ARABLOUEI: Where we go back in time...

ABDELFATAH: ...To understand the present.

ARABLOUEI: And you can hear, as the kind of percussion ends, everything devolves or dissolves into this - back into kind of a single-note thing that then has a woosh at the end. And the idea of the woosh...

ARABLOUEI: Yeah (laughter). The idea of the woosh is to, like, allow us to do this kind of introduction to the show.

PIERRE: I also like the woosh just because, like, you know, when you get into something so dense, you sort of have to give the listener, like, a moment to just, like, breathe for a second. It's, like, the listener can, like, pause and be like, all right, you know, this is what we're about to get into right now.

MIGAKI: OK, so once you've decided whether or not you want to write a theme song for your podcast...

PIERRE: And remember, you don't have to. A lot of great podcasts don't have music.

MIGAKI: That's right. The next question, though, is do you want music in your episode?

PIERRE: Yeah, this is different from the theme song. A lot of people call this scoring.

PIERRE: (Laughter) Not like that. It basically means that you've got music under your podcast that helps move the story along or gives it some emotional context.

MIGAKI: But before you even start to add music, you've got to get your story down. You've got to know what you're going to say and how the story ends - where it's going.

ARABLOUEI: We try to only put music where it's necessary.

PIERRE: So Ramtin - he does it all. He even scores episodes of Throughline.

ARABLOUEI: OK. So the first question we generally ask ourselves is, does this even need music? So then second thing is, what's the music going to add to the storytelling in this section? And the way we try to think about it is two things - rhythm and tone.

ARABLOUEI: So music can help you add rhythm to your story. Often, if you're hearing just, you know, a dry interview between two people, it may or may not have rhythm or a feeling that it's moving somewhere or moving toward something. And you can use music when that doesn't exist.

MIGAKI: See, we just did it right there with this music. So another example of using music to provide rhythm in a story is from an episode of Throughline called "There Will Be Bananas." It is a crazy story about the history of how bananas showed up in U.S. grocery stores. And so here's a clip where Rund Abdelfatah - the other host - is narrating this weeklong journey that a banana takes from Costa Rica to the U.S.

ABDELFATAH: And this is how they might have done it.

ABDELFATAH: Keith's workers in Costa Rica pick the bananas from his 800,000 acres at the exact right time - when they're still green.

ABDELFATAH: The bananas get transported to the coast on the railroad Keith built.

ABDELFATAH: Transferred onto refrigerated ships, the first of their kind, that United Fruit owned at the Port of Limon.

ABDELFATAH: Taken up the Atlantic to the port at New Orleans.

PIERRE: You know, Lauren, one of the things I really like about this is that you can hear the beat of the drum, and it's sort of like a heartbeat.

PIERRE: And then, as the story progresses, you hear this, like, other percussive instrument.

ARABLOUEI: The idea was that this process of taking a banana from the tree and getting it to the market is epic. And so we wanted the music to give you that sense of the - not just the kind of rhythm of making it, but part of that rhythm is the urgency. So can you imagine, in the, you know, early 20th century trying to get a banana from Costa Rica to Boston?

MIGAKI: Yeah, this music makes me feel that urgency. I feel a little stressed.

ARABLOUEI: That's what they felt. It was a stressful, very intense process that brought this to market, and so we wanted the music to kind of reflect that but also this kind of triumphant feel at the same time.

PIERRE: So when you're trying to tap into the emotions and, like, how something feels, you might be tempted to use all these different kinds of instruments. But one thing that Ramtin stresses - less is more.

ARABLOUEI: Music being used in audio should always have something missing. You don't want to create, like, a song. You want to create something that always feels like it needs - it could use another element if you were trying to make, like, a pop song or something like that. But always holding that back...

ARABLOUEI: ...Exactly. Always hold a little bit back, and that's a very difficult thing to do because your instincts are usually, like, bigger, like, better - make this huge. But you need to really always imagine what it's going to sound like underneath people talking or underneath sound design.

PIERRE: OK. So one thing to note, we don't actually add the music until we know exactly what we want to say in the podcast.

PIERRE: First, we record us talking and then we add the music afterwards.

MIGAKI: But it's good to think ahead of time about what kind of music you want to hear.

PIERRE: So we want to give a special shout out to Ramtin Arablouei. He co-hosts the podcast Throughline.

MIGAKI: Yeah, and you can find that by searching Throughline - that's one word - wherever you get your podcasts.

MIGAKI: I highly recommend the episode about bananas. You will never look at a banana the same way ever again.

PIERRE: For today's extra credit, think about whether your podcast needs music. That could be a theme song or music throughout the podcast.

MIGAKI: Yeah, and think about whether or not your podcast is serious or a little more playful. What kind of instruments or tones will convey that message?

PIERRE: And remember, you don't need a bunch of fancy instruments or anything like that to do this.

MIGAKI: In fact, stay tuned because, next week, Ramtin's going to be back.

MIGAKI: And he's going to show us how you can score your podcast using some pretty simple tools, like a toy drum and a $20 keyboard.

PIERRE: So much fun. And remember, if you have questions about music or the kind of music you can use, all that stuff is on our rules page. That's at npr.org/studentpodcastchallenge.

MIGAKI: Or you can shoot us an email. We're at studentpodcastchallenge@npr.org.

PIERRE: Our theme music is by the Sam D'Agostino. Chris Turpin is the head of special projects and innovation. Neal Carruth is our general manager of podcasts, and the senior vice president of programming is Anya Grundmann. I'm Jeff Pierre.