Accessibility links
How To Conduct a Good Podcast Interview : The Students' Podcast What makes a good interview? For starters, asking good questions! But there's so much more to it than asking who, what, where, when and why. On this episode, the art of the interview. We'll cover how to prepare for an interview and give tips for asking good questions and telling good stories.

The Art Of The Interview 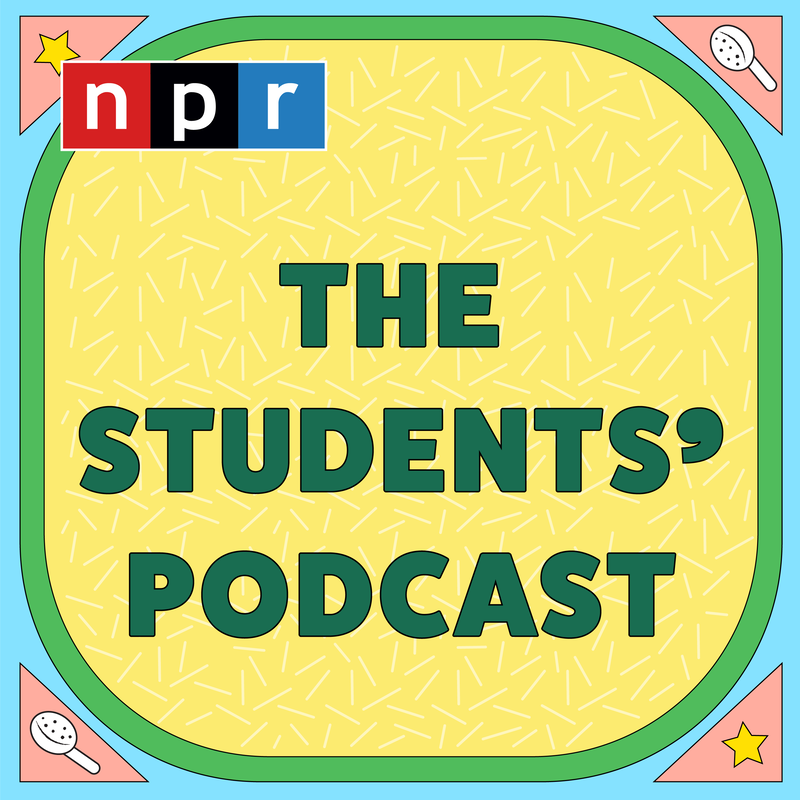 < The Art Of The Interview

The Art Of The Interview

MIGAKI: Have you ever played the question game?

MIGAKI: You know, the one where you only ask questions?

PIERRE: What do you mean, I only ask questions?

MIGAKI: Are you being serious right now?

PIERRE: Are you being serious right now?

MIGAKI: Why aren't you answering me?

PIERRE: And what does RJ Barrett have to do to be considered a front-runner for Rookie of the Year?

MIGAKI: You're listening to NPR's podcast that's all about making a podcast. Each week, we have short episodes filled with tips and inspiration to help you make an amazing podcast entry. I'm Lauren Migaki.

PIERRE: And I'm Jeff Pierre. Today on the show, the art of the interview - because no matter what kind of podcast you're making, you're probably going to need to do at least one interview.

MIGAKI: Yeah. And unlike our silly game at the top - thanks for playing - interviews are way more than just asking questions.

PIERRE: Yeah. It's all about making the person that you're talking to feel comfortable and like they're being heard.

MIGAKI: I wanted to learn from the interview experts. So I walked around and asked some folks in NPR's newsroom.

GENE DEMBY, BYLINE: I'm Gene Demby. I'm one of the hosts of the Code Switch podcast.

RUND ABDELFATAH, BYLINE: Hi. I'm Rund Abdelfatah. And I'm one of the hosts of Throughline from NPR.

LAINE KAPLAN-LEVENSON, BYLINE: My name is Laine Kaplan-Levenson. And I'm a producer with Throughline, the history podcast at NPR.

PIERRE: All right. So one of the things that all these folks have in common - they prepare.

MIGAKI: Yeah. And just like, hopefully, you would study for a test, you wouldn't walk into an interview without doing a little studying.

PIERRE: Say I want to do a podcast about the history of the three-point shot in basketball. I'll do a little reading. I'll watch a couple of clips of maybe James Harden.

PIERRE: And that will help me figure out who I should talk to.

MIGAKI: Yeah. And that's easy if you're interviewing, you know, say, James Harden.

PIERRE: Shout-out to the beard.

MIGAKI: But maybe you want to interview your basketball coach and get their view on three-pointers, right? They're less likely to have written articles or books or have done ESPN interviews, but you can still prepare for that interview.

DEMBY: So that's when a preinterview will come in.

PIERRE: That is Gene Demby from NPR's Code Switch podcast.

MIGAKI: And what he means by a preinterview is a conversation that you have but don't record.

DEMBY: If you can - and it's not always going to be possible - but if you can, you should just talk to them to get, like, a loose idea of what they may think about a thing. That way, you can determine, like, whether or not they're the person you want to interview.

PIERRE: OK. So if I'm interviewing my basketball coach about three-pointers, I might first do a preinterview with them to see what they have to say. You know, maybe they know a lot about shooting technique. Or maybe they're, like, a guru on shooting percentages. Or maybe they'll have this amazing story about the best three-point shot they've ever seen.

MIGAKI: And then once your basketball coach or James Harden has agreed to come on your podcast, you've got to figure out what you're going to ask them.

ABDELFATAH: The next step is write it down.

ABDELFATAH: Don't keep it all in your head because it's so easy to just get lost if it's not kind of clearly, like, spelled out from kind of your brain onto paper.

MIGAKI: Yeah. And it's not just Rund who does this. Gene says he plans out all his questions so that the conversation has a logical flow.

DEMBY: We write all of our questions down in advance. That way, we know, like, how we want the conversation to go ideally. And then we can sort of deviate if someone gives us an answer that's really, really good. But we also just want to have, like, a sort of scaffold, a sort of roadmap for the conversation.

PIERRE: So be prepared but also be open to surprises.

ABDELFATAH: Honestly, like, be prepared to change the story completely.

PIERRE: Yeah, so you never know when your guest might say something that completely blows your mind.

MIGAKI: Yeah. Like, Jeff, did you know the three-pointer was actually invented by dinosaurs?

MIGAKI: We wrote down all of our questions. Now the guest is here, and it's time for our interview.

PIERRE: And the first thing to do is to make your guest feel at ease. Laine Kaplan-Levenson is a producer at Throughline.

PIERRE: There's actually a really good trick to do all this. You start off with a question that's pretty engaging, but not very complicated.

MIGAKI: Remember, talking to a microphone is nerve-wracking at first. Your guest might be a little uncomfortable, a little nervous.

PIERRE: Laine's favorite question right now is asking someone about their first car. They actually tried it on a guest recently, and...

KAPLAN-LEVENSON: He got super excited and started talking about this old, beat-up, you know, whatever. And by the time that was done, like, we were all friends.

MIGAKI: Some other good ones - asking people about their pets or their favorite holiday. This is just to make sure that people feel at ease. And a producer pro-tip - it's also a good time to check your levels, your volume. Make sure it's not too loud or too quiet.

KAPLAN-LEVENSON: I try to just make it seem like we're just hanging out. And I'm asking them some really intense questions about (laughter) their professional life. But in a way that has them know that they can relax. They can exhale and be themselves.

PIERRE: Right. So our guest is warmed up, right? You know, they have a glass of water, maybe. Their phone is hopefully on silent.

PIERRE: And they're feeling a little bit more comfortable in front of the mic.

MIGAKI: Now we got to ask the hard questions. And like the saying goes, there are no dumb questions. But there are definitely some questions that are better than others.

DEMBY: You don't want to ask any questions that let someone say yes or no or give you a really quick answer. You want them to sort of expound.

PIERRE: Let's test this out.

PIERRE: So, Lauren, do you like the color blue?

PIERRE: Yeah, a little boring. So let's try it another way. Lauren, why do you love the color blue?

MIGAKI: I love the color blue because it reminds me of Cookie Monster. And he was my favorite character as a kid.

MIGAKI: It's also a much more interesting answer than yes or no.

PIERRE: All right. So this next tip comes from Ari Shapiro. He's one of the hosts of our afternoon show called All Things Considered.

ARI SHAPIRO, BYLINE: My suggestion is to keep your ears open and don't be afraid of the question, what do you mean by that? Or tell me more.

MIGAKI: Ari is one of the smartest people I know, which just proves that you don't need fancy questions to get fancy answers.

PIERRE: And if you feel like your guest hasn't quite answered your question and you've already tried and asked, what do you mean by that? - I've got another tip from Rand.

ABDELFATAH: Asking the same question, like, three or four times in a different way. And it's - it feels really awkward. It does. But, sometimes, that fourth answer is actually the perfect answer because it's, like, sometimes, your thoughts don't come together as well as you want them to the first time.

PIERRE: So maybe first I ask Lauren, you know, tell me about your first pet.

MIGAKI: But I was a little nervous, and I said um a lot, and I didn't tell a very good story.

MIGAKI: And now I have another shot at answering that question. My first pet was a gray cat named Arby (ph), and he was lovely.

PIERRE: (Laughter). OK. So we've got a tip now from our boss and editor, Steve Drummond. Ask one question at a time.

MIGAKI: Yeah. Those multipart questions just mean that your guests will just pick one of them to answer. So don't stack them all up like this.

MIGAKI: Jeff, what's the history of the three-point shot?

MIGAKI: And who is the creator of the three-point shot?

MIGAKI: And what does the three-pointer mean to you personally?

PIERRE: Well, I'm going to go back to your first question.

PIERRE: Yeah. So another thing to keep in mind when you're interviewing someone - listen. That's, like, 99% of the interview.

ABDELFATAH: This is probably the secret sauce to a good interview.

ABDELFATAH: So if they're getting really excited about something and they're telling this vivid story, then you want to draw out as much as you can, even if it wasn't on the roadmap to begin with.

MIGAKI: And don't be afraid to ask about those vivid details. What did it sound like? What were you seeing? What was the feeling in the air?

PIERRE: But being a good listener also means pulling back sometimes.

ABDELFATAH: Let's say there's a moment where the guest is struggling to find the words. Maybe they're getting emotional. Being quiet, being silent, like, giving them the space - that takes active listening.

MIGAKI: When you're really listening, you should be absorbing. You're not rushing to ask the next question. And you don't have to fill the silence.

PIERRE: Actually, don't be afraid of the silence. Sometimes, silence is the best follow up.

MIGAKI: I have a question for you.

MIGAKI: What is the extra credit this week?

PIERRE: So the extra credit this week - practice interviewing. Sit next to someone new at lunch or in class and strike up a conversation. Try using some open-ended questions like, how did that happen?

MIGAKI: Can you describe with your five senses what that experience was like?

PIERRE: Yeah. How did that make you feel?

PIERRE: This episode was produced by Sequoia Carrillo and was edited by Steve Drummond. LA Johnson is our art director and our in-house superhero.

MIGAKI: Our theme music is by Sam D'Agostino. Chris Turpin is head of special projects and innovation. Neal Carruth is our general manager of podcasts. And the senior vice president of programming is Anya Grundmann. I'm Lauren Migaki.

PIERRE: And I'm Jeff Pierre. Thanks for listening, everyone.