Accessibility links
The Trump Administration's Push To 'Consolidate' CDC Data : Consider This from NPR Until now, the Centers for Disease Control and Prevention has collected important information about COVID-19 hospitalizations and equipment from around the country. The Trump Administration now says hospitals must stop reporting that data to the CDC and instead send information to a different federal database. 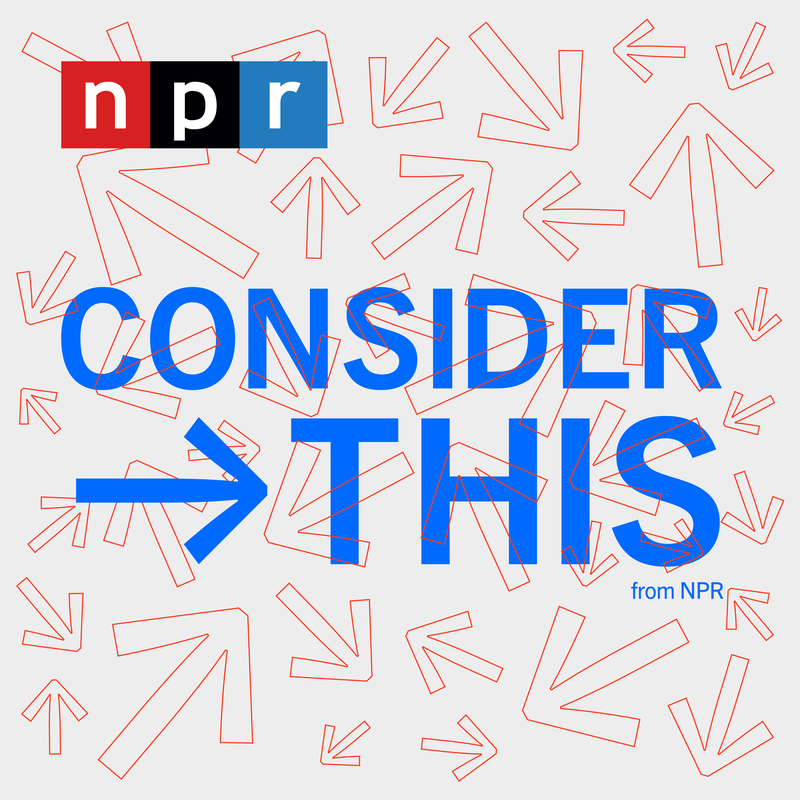 The pandemic is still unfolding in pretty much the same way it began four months ago - that is, different leaders in different places responding in very different ways.

BARBARA FERRER: We can't take anything off the table. There is absolutely no certainty of what exactly is going to happen next.

CHANG: In Los Angeles County, where cases and deaths have been rising, Public Health Director Barbara Ferrer would not rule out a new stay-at-home order.

FERRER: We do know for a fact, though, that we have to do everything we can to protect the health care system.

CHANG: On the same day, almost on the other side of the country, Georgia Governor Brian Kemp issued an executive order to rescind regulations that had passed in 15 cities and counties around his state, regulations requiring masks. Kemp called them a bridge too far.

Coming up, how the Trump administration is trying to change the way hospitals report crucial data about the pandemic. You're listening to CONSIDER THIS FROM NPR. Kelly McEvers is off this week. I'm Ailsa Chang. It's Thursday, July 16.

CHANG: Since the start of the pandemic, the Centers for Disease Control and Prevention has collected a ton of important data from hospitals around the country; we're talking about numbers of people admitted with COVID-19, how many ICU beds a hospital has, how much PPE, that kind of thing. And data like that is fed into trackers and websites that a lot of news organizations and public health groups maintain. Maybe you've even looked at some of those online to follow the latest numbers on the pandemic. That is one of the most important things the CDC does - collect and share data.

Well, this week, the Trump administration said that hospitals must stop reporting some of that data to the CDC, and instead what they have to do is report it to a different federal database being set up by a private company.

GEORGES BENJAMIN: One thing that I've learned is you never, ever, ever change processes in the middle of a disaster.

CHANG: Dr. Georges Benjamin is the director of the American Public Health Association.

BENJAMIN: It does not go well when you do that. No one knows what to do. And it basically confuses your response.

CHANG: But the CDC says their goal here is the opposite. It's to, quote, "streamline data gathering" by consolidating it at the Department of Health and Human Services.

ROBERT REDFIELD: Thank you, everyone, for joining us today...

REDFIELD: No one is taking access or data away from CDC.

CHANG: But while the CDC may still have access to the data, they may no longer control it or be able to decide whether to release it to the public.

CASSANDRA PIERRE: So it was very surprising - shocking even, I would say - for many of us to realize that we would be now required to report to HHS.

CHANG: Epidemiologists like Cassandra Pierre at Boston Medical Center now have days to get introduced to a whole new system.

PIERRE: It's going to be a lot of additional training time, designating people to help us with this, designating IT and other systems, our patient safety and quality improvement to come online and help with the process.

CHANG: But hospitals have a big incentive to do that work. You see, there's a drug called remdesivir that's been used to treat COVID-19, and it's in limited supply. On Monday, an email went out from the American Hospital Association. It was flagged as special bulletin. The email was later obtained by NPR. And what the email suggested was this - whether hospitals receive remdesivir from the federal government would be tied to use of the new system. The Department of Health and Human Services told NPR today that, in distributing remdesivir to states, the government is using information from the new portal to determine weekly allocations of the drug.

JENNIFER NUZZO: Surveillance benefits from being integrated - to be able to see multiple data streams in the same place, to be able to...

CHANG: Jennifer Nuzzo at Johns Hopkins points out that while it's only hospital data that would be affected by this new plan, changing the system for a single data set could hurt the ability of scientists and the public to have a clear, full picture of all the numbers.

NUZZO: When they're captured in completely separate systems by completely separate agencies, it'll be harder to make comparisons and to do the deeper analysis - trying to understand if, say, rising cases are contributing to rising hospitalizations or vice versa.

CHANG: And in a worrying sign for public health experts, crucial data sets on hospital capacity were already missing from the CDC website today. For more on this story, NPR's Pien Huang and Selena Simmons-Duffin have a full report. You can find a link in our episode notes.

CHANG: Here's another story about government data and how it can be used. The president and his administration have said that the federal government should be able to know exactly how many people in the country are U.S. citizens and how many are not. This week, NPR learned that four states have agreed to help in that effort by sharing records of their state driver's licenses and state IDs. NPR's Hansi Lo Wang broke this story. He talked about it with my colleague Sarah McCammon.

MCCAMMON: You've been following this for a long time. So catch us up. Why is this happening now?

WANG: Well, remember last year when the Supreme Court blocked the Trump administration from putting a citizenship question on the 2020 census. To be very clear, that question is not on this year's census forms. So President Trump has been moving ahead with a backup plan - this executive order Trump issued last July to use government records to try to narrow down who is and who is not a U.S. citizen.

MCCAMMON: So which states are sharing their records with the Trump administration? And how will that help determine people's citizenship status?

WANG: The four states that I've confirmed are Iowa, South Carolina, South Dakota and Nebraska, which was the first to voluntarily sign an agreement back in November. And you know, not every state is doing this. Some states have been asked by the Trump administration to share information and said, no, we're not sharing. But researchers at the U.S. Census Bureau are getting data from these four states. You know, they're getting people's names, addresses, other details from driver's license records, state ID records.

And these details, the researchers hope, will help them find matches among all the other records they've been gathering from Immigration and Customs Enforcement, the IRS, Social Security Administration, other federal agencies. They're trying to determine the most up-to-date citizenship status of every adult in the country. You know, it's really important to keep in mind here that the Census Bureau is under orders to release anonymized information and that under federal law, this information can only be used for statistical purposes - can't be used against a person.

MCCAMMON: And Hansi, why does the Trump administration want to know who is and is not a citizen? How would they use this information?

WANG: Well, if you read the executive order on citizenship information from last July, it says this kind of citizenship data - which would be more detailed than what the federal government currently has through a national survey conducted by the Census Bureau - this information could be used, the order says, to have a more reliable count of unauthorized immigrants in the U.S. It's not clear exactly how the administration would figure out who among the noncitizen count are unauthorized immigrants versus green card holders.

The order also says that the citizenship data could allow state and local governments to redraw voting districts in a radically different way. You know, for the most part, voting districts are drawn based on the number of all of the residents, including children, in an area. The Trump administration says it wants to allow districts to be drawn based on just the number of U.S. citizens old enough to vote. And a prominent GOP strategist who died in 2018 had concluded that way of redistricting would politically benefit Republicans and non-Hispanic white people.

MCCAMMON: And what kind of reaction are you hearing to these measures, especially from immigrant advocates?

WANG: Well, I'm tracking this ongoing federal lawsuit filed by groups arguing that the Trump administration is trying to prevent Latinos, noncitizens, other immigrants from getting their fair share in political representation. And you know, the Census Bureau right now is on track to release the citizenship data by the end of next July if the administration is allowed to keep moving forward with this project.

CHANG: That was NPR's Hansi Lo Wang with my colleague Sarah McCammon.

CHANG: And finally today, surgical masks are still hard to come by. And now health care workers have something new to worry about - fake certificates that use the FDA logo to sell masks that look like they are approved or tested by the FDA.

BEN ENGLAND: The obvious implication is that it's an FDA document...

ENGLAND: ...Or the product or the facility to which it relates is somehow approved.

CHANG: But they're not. The FDA doesn't issue certificates or approve masks. Companies simply have to register with the FDA. At one point in the last few months, Betsy Marville, a nurse, says colleagues started complaining about these so-called hairy masks.

BETSY MARVILLE: They've got some kind of fibers that are shedding off of them when they wear them, and they're irritating their nose and eyes and their respiratory tract.

CHANG: The box those masks came in - no manufacturing information. It only said, quote, "blue face mask" and, quote, "made in China." Ben England says a lot of these shipments are coming from manufacturers overseas who have no experience making medical supplies.

ENGLAND: They were making, you know, hats, socks, last week and teddy bears. And now they're making masks.

CHANG: Ben England spoke to NPR correspondent Sydney Lupkin. Additional reporting on this episode came from our colleagues at All Things Considered. And special thanks to Pien Huang and Selena Simmons-Duffin. For more news, download the NPR One app or tune in to your local public radio station. Supporting that station makes this podcast possible.

I'm Ailsa Chang, and I will be back with more tomorrow.