Accessibility links
Two Whats!? And a Wow! - Holiday Wrap Battle : Wow in the World Why does Guy Raz think Mindy wants to throw a rap battle? And what does this have to do with the HOLIDAYS?! We've got questions AND answers on this special, jolly round of Two Whats?! & A Wow! We're challenging you to separate the fact from the fiction about the HOLIDAYS! 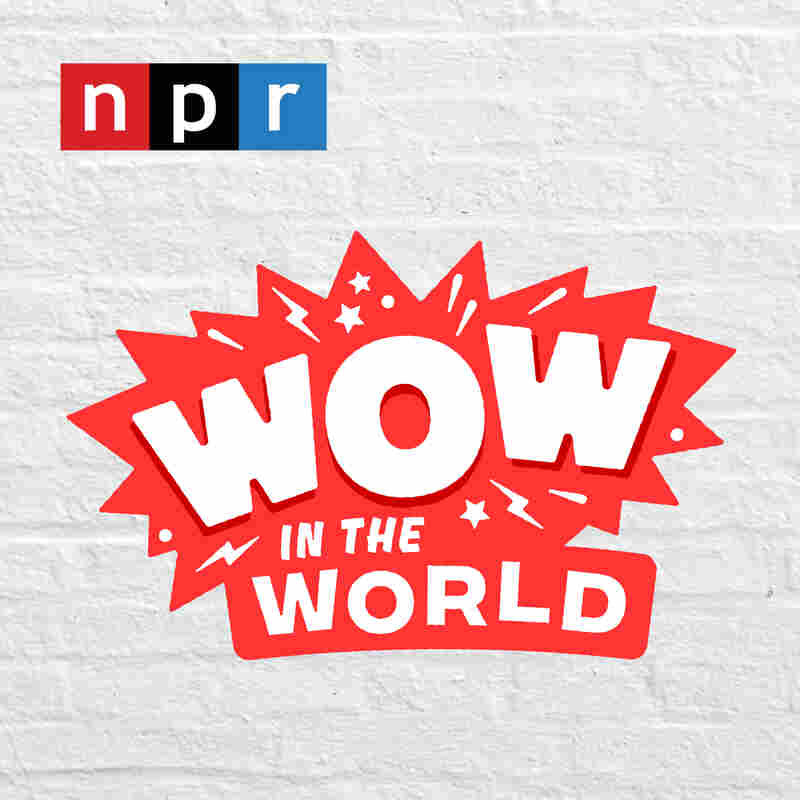 Oh, perfect timing, Guy Razzie. Now we can finally get this show on the road. You ready to compete in the wrap battle of the century?

RAZ: Rap battle of the what?

THOMAS: OK, you're right. Maybe not of the century, but...

THOMAS: Yeah. See - I didn't think I could wrap, either, Guy Raz. But then I realized it doesn't matter how you fold the paper; it all comes down to the tape. Sometimes my presents are wrapped completely in tape only.

THOMAS: Yeah. What'd you think I was talking about?

THOMAS: See - I was thinking we'd compete to see who can rap a present the fastest. But there's a twist - since this is a special holiday gift wrap battle, each contestant will be wrapping their presents wearing figure skates during an indoor snowstorm.

RAZ: And indoor what now?

THOMAS: And instead of wrapping paper, we'll be using your birth certificate.

RAZ: Mindy, why don't we start our game show first, and then maybe we can revisit some of these wrap battle rules?

THOMAS: Sounds good to me. Deck the halls.

THOMAS: And rev up your sleighs - in three, two, one.

UNIDENTIFIED ACTOR #1: (As character) And now for everyone's second-favorite game show after "Beans, Beans, Beans" - it's "Two Whats?! And A Wow!"

UNIDENTIFIED ACTOR #1: (As character) With your hosts, Mindy and Guy Raz.

THOMAS: Welcome back, Wowzers. It's time for another chilly round of "Two Whats?! And A Wow!"

RAZ: The scientific game show that separates the wows from the whats. And the category for today is the holiday season. Mindy, why don't you refresh our contestants on how the game works?

THOMAS: You know it. Wowzers, we are going to present you with three statements about the holiday season. But - and this is a big but...

THOMAS: ...Only one of those statements will be a true wow. The other two? Just a couple of made-up whats.

UNIDENTIFIED ACTOR #2: (As character) What?

RAZ: OK, let's get started. Which of the following statements is a true wow about the holiday season? Is it A, the largest gathering of people wearing holiday sweaters happened at a rock concert during the summer?

THOMAS: Or is it B, Arctic foxes change the color of their fur around the holiday season - or winter?

RAZ: Or is it C, artificial snow can be made with Oobleck?

THOMAS: When you think you know the answer, whisper it to the nearest gingerbread person.

RAZ: We're going to take a quick break to give you a chance to think. And when we come back, we'll reveal whether your wow is the winning wow.

UNIDENTIFIED CHILD #1: "Two Whats?! And A Wow!" will be right back. Grown-ups, this message is for you.

That's it. Now back to the show.

THOMAS: OK, Wowzers, it's time to reveal the winning wow.

RAZ: But before we do that, let's do a quick review.

THOMAS: We gave you three statements about the holiday season and challenged you to guess which one was the one true wow.

RAZ: Was it A, the largest gathering of people wearing holiday sweaters happened at a rock concert during the summer?

THOMAS: Or was it B, Arctic foxes change the color of their fur around the holiday season - or winter?

RAZ: Or was it C, artificial snow can be made with Oobleck?

THOMAS: And to answer today's question, joining us by phone, it's Ellis (ph) from Kansas. Ellis, what's the wow?

ELLIS: Hi, Mindy and Guy Raz. I'm Ellis. I'm 8 years old, and I live in Shawnee, Kan. My wow in the world is that Arctic fox change colors due to the weather. Say hi to Reggie for me...

RAZ: If you guessed B, Arctic foxes change the color of their fur around the holiday season - or winter - you're correct.

THOMAS: These Arctic foxes make sure their furry coats never go out of season. Around winter, when the amount of daylight decreases, Arctic foxes change their fur from a brown-and-cream color to white. This is to help them blend more easily with their snowy environment.

RAZ: Now, if you guessed A, you were pretty close. The largest gathering of people wearing holiday sweaters happened at a Kansas basketball game in December of 2015. There were almost 3,500 basketball fans who dressed up in holiday sweaters to make sweater history.

THOMAS: And if you guessed C, unfortunately Oobleck is not used to make artificial snow, although there are a lot of different materials used to make it. Some people use paper. Some use plastic. And even others use painted cereal flakes.

RAZ: Now, Mindy, why don't you tell our winning Wowzers what they've won?

THOMAS: Guy Raz, all of our winning Wowzers today will be taking home their very own invisible melted snowman.

THOMAS: Well, they were still intact at the beginning of this game show. And now, well, melted snowmen are all that we have. If you just stick a carrot on it, you won't even know the difference - I promise.

RAZ: In any case, congratulations to all of our winning Wowzers. And that's just about all the time we have for today.

THOMAS: But before we go, we have a little scientific challenge for you. We call it Operation Snow-tacular (ph).

RAZ: We know that snow forms when water vapor up in the clouds gets so cold it turns into ice crystals, and these tiny ice crystals make up snowflakes. But that's not the only way to make snow - right, Mindy?

THOMAS: Well, scientifically speaking, it is the only way to make snow.

RAZ: OK. But our Wowzers at home can still make their very own fake snow.

THOMAS: Exact-oritos (ph), Guy Raz. Wowzers, first ask your grown-up if you have any white hair conditioner and baking soda around the house.

RAZ: If you do, ask your grown-up to help you mix together these items to make fake snow. First step is putting about 3 cups' worth of baking soda into a big bowl.

THOMAS: Then you're going to add about half a cup of hair conditioner. And no, this will not make your baking soda have luscious, flowing hair.

RAZ: Then keep mixing it with your hands until it's all mixed together.

THOMAS: And don't forget to take a photo or video. Grown-ups, you can upload pictures and videos to us at tinkercast.com/share.

RAZ: Well, that's all for this round of "Two Whats?! And A Wow!" Thanks for listening.

THOMAS: Until next time...

RAZ: "Two Whats?! And A Wow!" is produced by Mindy Thomas and me, Guy Raz.

THOMAS: Our writers team is made up of Anna Zagorski, Darnell Walker (ph) and Heba Gouda (ph).

THOMAS: Special thanks to Anya Grundmann and the team at NPR.

RAZ: Our theme song was written and composed by The Pop Ups. For more on their three-time-Grammy-nominated, all-ages music, find them at thepopups.com.

RAZ: And if you'd like to become a member of the World Organization of Wowzers, where you can get an autographed picture of me and Mindy, an exclusive T-shirt, magnifying goggles, special activities for each episode and much more, visit tinkercast.com to find out how.

THOMAS: Thanks again for listening. Now go forth and find your wow.

UNIDENTIFIED CHILD #2: "Two Whats?! And A Wow!" is made by Tinkercast and sent to you by NPR.